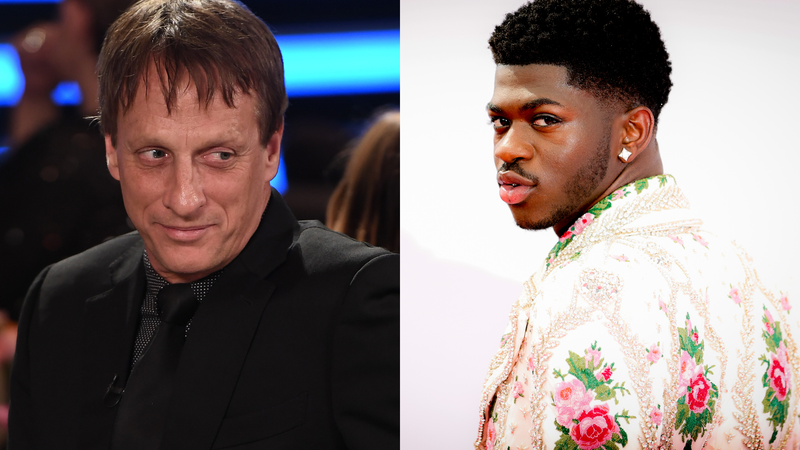 So do you remember when every Karen and Ken collectively freaked out over those Lil Nas X blood-containing “Satan Shoes”? Well now Tony Hawk is peddling limited edition skateboards with his blood mixed into the deck paint. Only difference is, no one freaked out over Hawk’s announcement, and Nas (rightfully so) isn’t feeling this double standard ish.

For those of you who are like Wuh? Huh? Let us explain. Hawk recently partnered with Liquid Death Mountain Water and supplied two vials of his blood, which have since been sanitized and mixed with paint used on 100 limited edition skateboards.

The boards, priced at $500 and advertised as being “infused with 100 percent real Tony Hawk” each came with a copy of a certificate authenticating the board. And check this, after an hour of becoming available, Liquid Death announced that the limited edition boards had sold out, with ten percent of the proceeds going to the anti-plastic nonprofit 5 Gyres and Hawk’s Skatepark Project.

Yes, there is actually @tonyhawk’s real blood in these skateboards. And yes, we sterilized it first. Own your very own piece of the Birdman today. But act fast! There are only 100 of them. https://t.co/UlxFy0HLB1 pic.twitter.com/TFDtvMPt7G

Honestly didn’t even realize Tony Hawk still had it like that, but good for him.

Anyway, the following day Lil Nas took to Twitter to air out his grievances on the matter, nothing against Tony, just the blatant double standard. Writing, “Now that tony hawk has released skateboards with his blood painted on them, and there was no public outrage, are y’all ready to admit y’all were never actually upset over the blood in the shoes? and maybe u were mad for some other reason?”

now that tony hawk has released skateboards with his blood painted on them, and there was no public outrage, are y’all ready to admit y’all were never actually upset over the blood in the shoes? and maybe u were mad for some other reason?

Nike lawsuit aside, as you all should well know by now, with it having been all up on the internet, back in March the hate parade came for Lil Nas with a quickness after his “MONTERO (Call Me By Your Name)” music video came out. The outrage however, was supposedly solely about the so-called “Satan Shoes” he wore in the visual. Those limited-edition Air Max 97s collab between Nas and Brooklyn-based product design studio MSCHF that contained a drop of human blood, which btw also sold out within minutes, however never came to fruition.

Nothing against Tony, but obviously the Twitter popped off simply pointing out the double standard.

so lil nas x can make custom sneakers with blood in them and there's outrage, but tony hawk can make skateboards with HIS OWN blood in the paint and somehow it's less of an issue???

Oh, but when @LilNasX does it, it's a problem? pic.twitter.com/269UrrpgTj

I don’t hate Tony Hawk but the fact @LilNasX was condemned for putting a drop of blood in a shoe and Hawk is being praised for putting it on a board stinks of privilege https://t.co/tmpE4UrY5K

In other, more delightful news, it’s finally that time ya’ll… well almost. As promised Lil Nas X is finally going to present us with his debut album MONTERO. Expected to feature the singles “Montero (Call Me by Your Name)” and “Industry Baby,” the LP is set to drop September 17.
Check out the album trailer, which teases a new song, below.