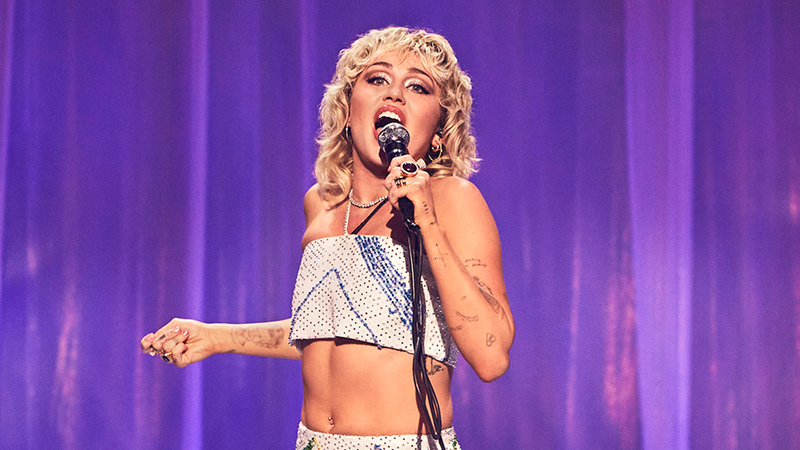 On the Fall cover of Interview magazine, Miley Cyrus stripped alllll the way down. No for real, apart from a sage feathered Gucci coat draped over her shoulders, Miley was completely nude, well covered only by a close-up photograph of her "TA-TAs" — so yeah basically nude, also how meta.

Straying from her frequently as of late glam rocker vibes, Miley went with a bare, clean, and natural aesthetic, emphasis on the bare. And the shoot had it all: a pile of peeled bananas, giant chocolate bars, janky wolf mask and most importantly FASHUUNN!

The vibe was sexy, sweet, and sophisticated, and Miley nailed it with every look. Wearing a sheer white romper and knee socks, a Miu Miu slip dress, sheer black Gucci logo underwear, furry Chanel boots and a lace top layered over a bodysuit, a yellow Gucci logo bra top and skirt, and the ubiquitous Versace platforms in a hot pink.

As for the interview itself, Miley spoke with Metallica drummer Lars Ulrich, during which she revealed some of the negative feedback she has received for her low voice.

After the two reminisced about her recent Metallica cover of “Nothing Else Matters” which she sang on the tribute album, The Metallica Blacklist, Miley noted, “I stuck, on some level, to the melody. I even went down to some of those octaves, because singing those super-low lead vocals is so satisfying.”

Which subsequently led the “Plastic Hearts” singer to reveal the following — “My whole life, whether in vocal training or just continuing to hone my craft, it’s always been about, ‘Why do you sound like a man? Where’s your f***ing falsetto, b****? Why can’t you sing the high octave of 'Party in the U.S.A.' anymore?’ In this song, I get to sing in that low register, and I get to live in that authentic, genuine sound. My voice is how I represent myself. It’s how I express myself. I’ve worked with so many people who tell me, ‘We’re going to have to bring in a singer to hit those high parts.’”

Cyrus continued, “You know, 'falsetto' is this Latin term for when a boy goes through puberty, but they still want him to sing in the choir. It means 'false.'”

“I don’t have a false voice. You know me personally, we’ve hung at parties." Miley insisted, proudly embracing her authenticity, she stated, “I am who I am. I say what I mean in the moment, even if that changes tomorrow. I was honored by the fact that I didn’t have to sing this song in the way that females are ‘supposed’ to sing," the musician added.

“You can hear that at the end of the song, when I take the gloves off and just start flying. That part of the song really grabs people. It’s that lower register of my voice. So I’m grateful to have a song where I can lean into that.”

Additionally the two connected over their love of collaborating across genres and opening up the musical divide to expose fans to new sounds. As well as their excitement about being able to share and enjoy live music again.

As to be expected, the cover pic shared on social media was strategically covered in all the “inappropriate” places for censoring purposes. But we gotchu, you can check out the artistic shot as it was meant to be seen, plus the full interview here.