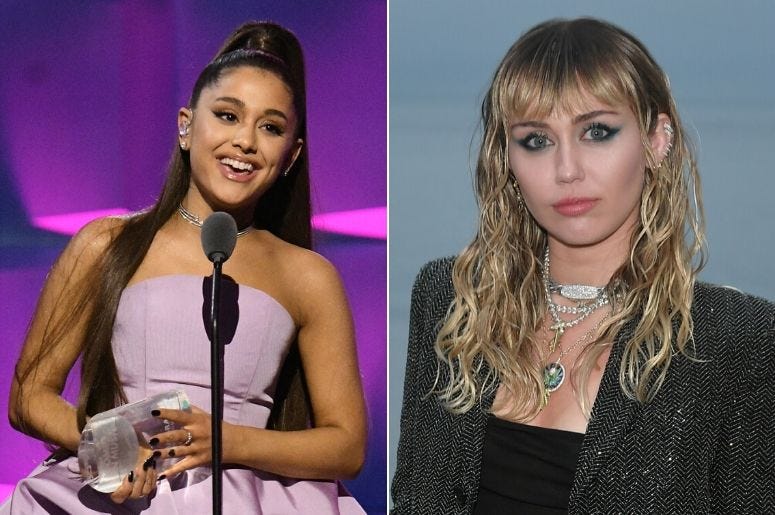 This year we’re thankful for this holiday freshness.

Both Ariana Grande and Miley Cyrus have wowed fans on Instagram this week, rocking new cuts and throwback styles just in time for turkey day. The “Don’t Call Me Angel” collab Queens each rolled out something new, and we’re here for it.

Grande is known for her high ponytail energy, but the “thank u, next” singer shared a video of her curly hair on her Instagram story and sent fans into a panic. Rocking that original Ari look, the singer is shown with the curls in full effect.

The reaction has been loud across social media, with many wanting more curls from the GRAMMY nominee.

From hidden hair talent to a sharp new style, Miley Cyrus also changed up her locks for the long weekend, rocking what is being called a “modern mullet.” It appears the new do was started at least by her mom, Tish Cyrus, but her stylist Sally Hershberger appears to have the final snip on the controversial cut.

Those that oppose the new cut were quick to call out Hershberger, but the celebrity stylist fired back.

"First of all if you knew anything about hair, it’s the position she’s in that’s why it looks that way, it’s 100 percent even and she also had it straightened so it’s more severe, which I actually like," Hershberger blasted in the comment section. "That being said, chill out and know it’s a modern mullet, which is very cool but it’s something you probably aren’t even well-versed in sorry but not sorry."

Earlier this year, Cyrus and Grande linked up on “Don’t Call Me Angel” for the Charlie’s Angels soundtrack which was executive produced by Ariana.

Last week Grande was also nominated 5 times for the 2020 GRAMMY Awards, including a nod for Album of the Year.