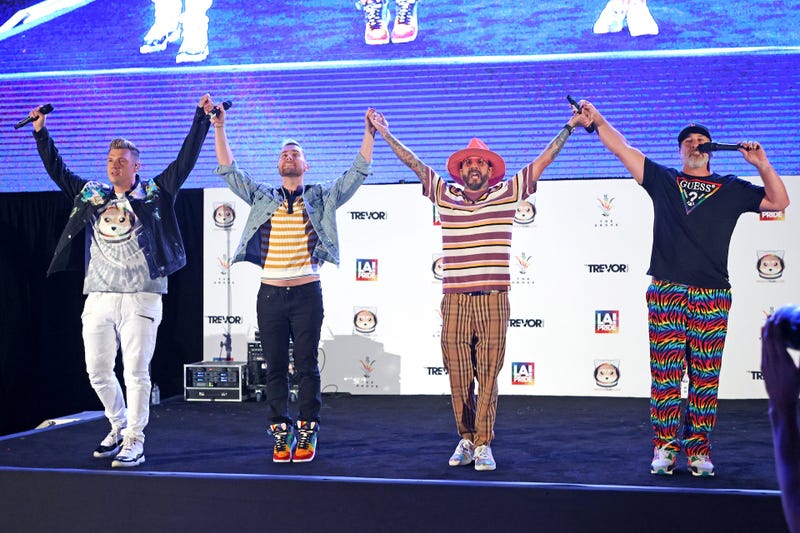 After coming together for a Bingo Under the Stars event over the weekend in honor of Pride, Backstreet Boys’ AJ McLean and Nick Carter along with *NSYNC’s Joey Fatone and Lance Bass are teasing fans saying the collaboration of the two groups for the event was just the beginning.

The four boy band members, being referred to as Back-Sync, made dreams come true at last weekend’s event when they took the stage together performing Backstreet Boys’ “I Want It That Way,” and *NSYNC’s “Bye, Bye, Bye,” in front of an enthusiastic crowd.

Since the performance, ideas have been swirling for McLean, Carter, Fatone and Bass who have dreamed up endless possibilities (nothing set in stone) including a Vegas residency, film appearances and the desire for a full reunion tour with all members of both groups.

“The more the merrier,” said McLean. “Fans still want a Backstreet/*NSYNC tour, but it’s got to be all 10 of us. It’s the only way to make it work.”

While they clearly have four members ready to roll, McClean went on to address why getting *NSYNC’s Justin Timberlake to agree could be difficult.

“I think he’d be sleeping on it if he didn’t do it,” McClean expressed. “But he’s a dad doing his thing and I completely respect that.”

Nothing poses impossible for these guys right now, who have even expressed interest in collaborating with other boy bands of their time.