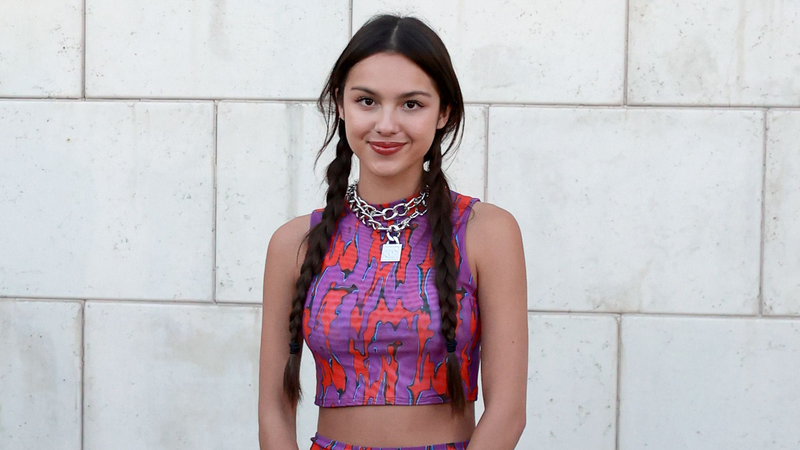 Olivia Rodrigo took to the gram to post a cute pic, which she captioned with some of her very own lyrics. “They say these are the golden years,” Rodrigo wrote alongside the post, adding a few spider emojis, obvi because of her pink sweater tube top that features two rows of arachnids.

While it might’ve been way to long ago for some of you to remember, being a teenager feels like you’re in limbo, you are no longer a child, but not yet an adult. Every emotion is super heightened, and since Taylor Swift, no one has channeled those feelings better than Olivia Rodrigo.

As the newest pop princess, Olivia has been making waves since she dropped her first single “drivers license,” that skyrocketed straight to the top of the charts earlier this year. And there is where she’s remained, as well as a subject on everyone’s lips.

From her not so subtle lyrics, to her current dating life, Olivia is one hot topic, and no we don’t mean the store at the mall. Even though that’s probably where you could get similar boots.

Another reason O.R. is currently making headlines is for her not so stellar merch, making her fans feel all kinds of SOUR, and they’re not afraid to show it all over TikTok.

As many videos have begun to surface of fans talking candidly about what they feel are "low-quality" and "cheap" products, some of which appeared noticeably different from the images on her site. While others seem to be more than annoyed about the amount of time it’s taken for them still not receive their orders.

And the complaints aren’t just staying on TikTok, as you can see from the comments section of Olivia’s latest post above.

In one particular video posted by TikToker Delaney McCabe, she alleged that the $32 T-shirt she ordered from Rodrigo's merch store, which is actually no longer available for purchase, looked dramatically different than what was advertised on the website.

As advertised, the shirt appears to be a more a vintage vibe muted purple with white-colored lettering, but as McCabe demonstrates the t-shirt she received was a bright purple color with white lettering. And if we’re keeping it real, looks like a Michael’s DIY project.

So while there’s nothing brutal about Olivia’s post, and we’re actually living for it, her merch situation sure is. By the looks of her team is already on it, but hopefully everything, including the shipping issues get handled soon though. We’re sure she doesn’t want a Gen Z rebellion on her hands… big yikes.