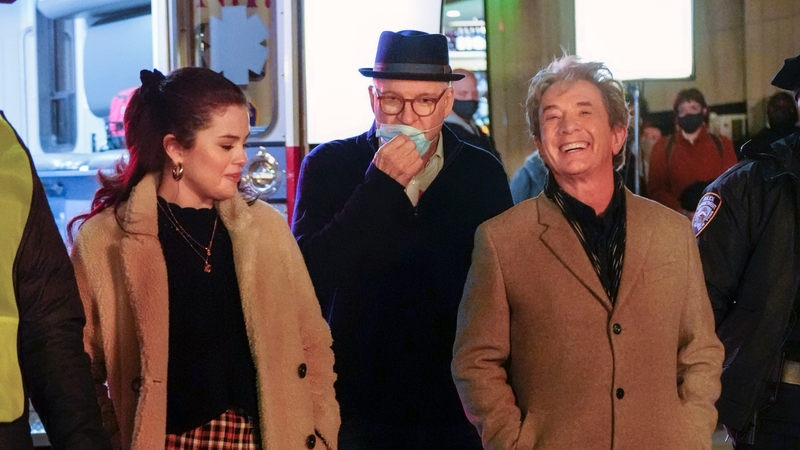 Here’s a sentence we never thought we say. While filming their soon to debut Hulu Original Series Only Murders in the Building, Selena Gomez taught Steve Martin and Martin Short the meaning of “WAP,” along with a few of the song's saucy lyrics to the Cardi B bop.

So naturally, it’s been quite the go-to topic for the trio throughout the shows promotional tour.

During a recent virtual sit down with BBC Radio 1, both Steve and Short were asked to reveal their favorite SelGo song and while Steve went with the Barney classic “Splish Splash I Was Taking a Bath,” Short offered up an unexpected answer, saying, “ I think your cover of W-A-P is one of my favorites,” and yes he spelled out each letter.

Martin was of course kidding, but Steve wasn’t when he revealed, “Selena introduced us to that song. To us it was only a rumor, until she said ‘Hey, listen to this.’”

“I was called to set as she was still reading all the lyrics to Steve… he keeps going ‘go back,’” Short added mimicking Steve’s open eyed stare.

But as we said, this wasn’t the only instance Martin and Short brought up their recent musical enlightenment, all thanks to SelGo. In recent interview with ELLE magazine, Martin hilariously described the moment Steve shared his, at the time, recent discovery, with him saying, “Steve said, ‘Marty, I just heard new lyrics to ‘Top Hat and Tails.’” And apparently, Gomez was quite the educator on set, as she additionally revealed to ELLE, “There was a line in the script that said, ‘She’s an OG.’ And Steve walked up and said, ‘Can somebody tell me what OG means?’ I started dying laughing.”

Only Murders in the Building is set to premiere August 31 on Hulu, with new episodes rolling out weekly. Per IMDb, the series follows three strangers Charles (Martin), Oliver (Short) and Mabel (Gomez), who share an obsession with true crime and suddenly find themselves wrapped up in one.

Just from watching this interview alone you can tell their comedic chemistry is on point, so you’ll definitely want to give the whole thing a watch ( “WAP” talk takes place at around 4:41 btw). But, just in case you need a bit more convincing, check out the trailer below.

Speaking of something you should check out. If you’re here for SelGo related news, we have just the thing for you. Audacy’s Pop Now exclusive station to listen to today's biggest Pop hits, which obvi includes Selena. And if you’re here for the “WAP” of it all, we also gotchu with Audacy’s Cardi B Radio.