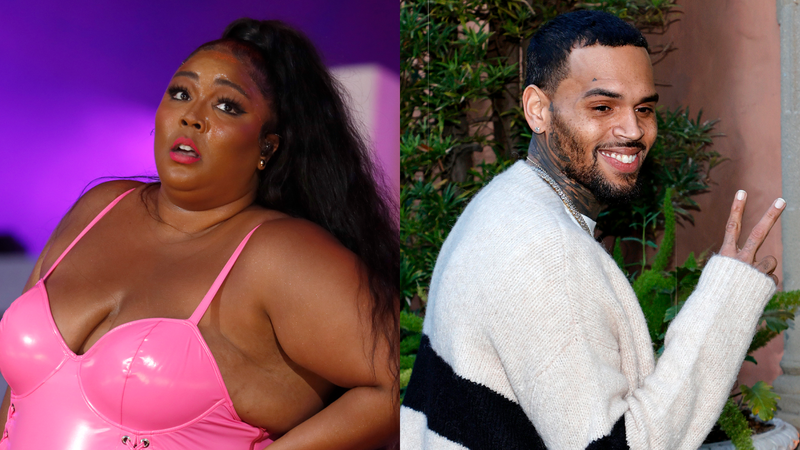 Over the weekend a a fan video surfaced of Lizzo referring to Chris Brown as her “favorite person” while asking to take a photo with him, and the internet isn’t here for it… like at all.

The vid of the fangirl interaction sees Lizzo approaching Brown backstage at his Millennium Tour, before posing for said picture. And now Lizzo is getting roasted for it.

Not the least bit surprising tbh — Lizzo fans aren’t the biggest CB fans, who has been a controversial figure in the music world for over a decade. After pleading guilty to felony assault against Rihanna in 2009, and has since been accused of threatening a woman with a gun at his house in 2016, as well as rape allegations in 2019.

Obviously, Twitter popped off, with users going back and forth about if Lizzo should have posed with Brown. Others we’re there were to defend the singer, with one person writing, "I know y'all ain't canceling Lizzo when all your faves have released a feature with Chris Brown in the last 5 years.”

Which if we’re keeping it 100 is actually facts. Chris has collaborated with an impressive roster of top artists including Drake, Justin Bieber, H.E.R., Wale and even Rihanna since the original abuse allegations on the song "Nobody's Business," which appears on Rih’s 2011 album, Unapologetic.

Obviously there’s more and like we said, not all were as nice. As always, we did the scrolling so you wouldn’t have to. Check out some of the more heated tweets below

Another added, “Lizzo is, of course, not even close to the only major celebrity to express respect for (or in many and way more egregious cases work with) Chris Brown. But this is such a bizarre move against her brand that my mind is completely blown.”

A third said, “I'm taking back my rumors streams…” while another wrote, “oh heeeeell no.”