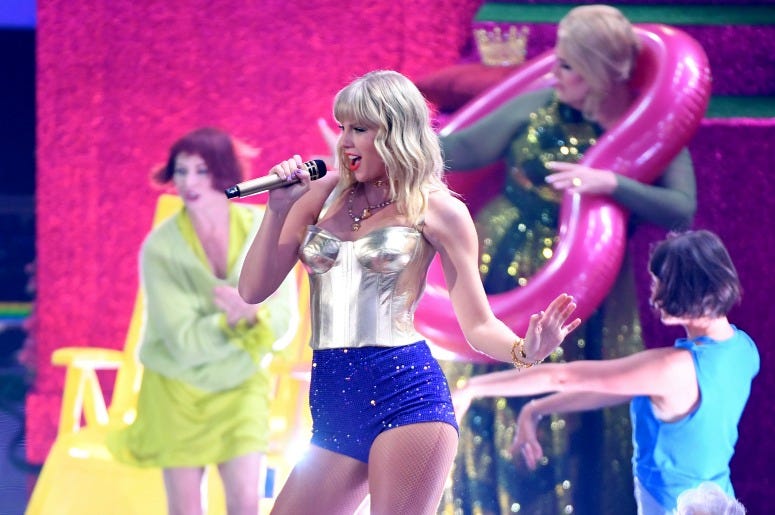 The 2019 MTV Video Music Awards made a move to New Jersey, handed out a handful of Moonpersons, and finally paid tribute to Missy Elliott this year before you barely got into your week. Featuring over a dozen high voltage performances, some ripped right from the headlines of new couples and sad splits, the star-powered saga provided plenty of big moments. From Taylor Swift at the top to an all-star jam at the end, these are some of the highlights of the latest edition of the VMAs, hosted by Sebastian Maniscalco.

In a two-part performance, Taylor Swift shared two big songs from her top-selling new album, Lover. First with life-sized rainbows and a shimmering gold top, Swift brought her LGBT ally anthem party to life for “You Need To Calm Down.” With 3-D letters popping across the crowd, Taylor recreated her multi-nominated tune before being handed a jacket and a guitar for a more intimate moment. With the sky exploding behind her with shots of light, Swift’s performance of “Lover” inspired slow dancing in the crowd and an approving nod from DJ Khaled, on her way to a personal but arena-sized  affecting performance.

I'd like to call attention to @Camila_Cabello's adorable, perfect reaction to @taylorswift13 performing #Lover!!💕 #VMAs pic.twitter.com/eFGo5ZsuDY

And Your Host… Sebastian Maniscalco

Rocking a glitter jacket and armed with all the Italian family jokes you can stand, Sebastian Maniscalco started the evening slightly out of place, more like a funny uncle than the exciting center of the VMAs. Away from riffs on safe spaces and learning about “shade,” Mansicalco still found some funny moments in his open, explaining that the night was “music the way it was always intended… in a hockey rink in the middle of Newark.” There’s something charming about the guy that doesn’t completely get this “kid stuff,” but it burns quick for this crowd.

Sebastian Maniscalco is up there making jokes better suited for the parents of the current MTV viewer in his "cool dad" jacket.

Hitting a sky-high note and literally snatching everyone’s wig, Lizzo brought an inflatable butt and attitude for days. “Truth Hurts,” “Good As Hell,” and a bejeweled bottle of tequila were just the beginning for the singer who used the platform to put a spotlight on her message. “I’m tired of the bulls***,” she announced as the crowd roared. “It’s so hard to love yourself in a world that doesn’t love you back.”

Jonas Brothers at The Stone Pony

Maybe the best tribute to New Jersey of the night was from the Jonas Brothers, who took their giant Happiness Begins tour to the small stage at The Stone Pony. The institution couldn’t hold them for long, as the performance of “Sucker” quickly became a parking lot party, like all the best nights in New Jersey.

Thank you #VMAs for bringing us back to The Stone Pony!! What a crowd 😳 We love you guys ❤️🎉 pic.twitter.com/qLKIY4shnU

After flashing to a future where Lil Nas X is President and on the 3,162 remix of “Old Town Road,” the breakout star took it to Tron, dishing out futuristic vibes and surprising choreography for "Panini."

Missy Elliott Throws It Back

Starting with her new legacy-checking single “Throw It Back,” Missy Elliott took a tour of her biggest songs and influential videos before accepting the Video Vanguard Award. Bringing the rain and her mind-bending visuals to the stage for the first time in 16 years, Elliott showed what makes her one of the most unique video creators in MTV’s history.

“That was fire,” Cardi B correctly stated before presenting Elliott with the award, one that’s been years in the making. “I have worked diligently for over two decades,” Elliott explained. “I never thought that I would be standing up here receiving this award. It means so much to me. It doesn’t go unnoticed the support and love you’ve given to me.”

In the most sultry and speculative moment of the night, Mendes and Cabello brought their duet “Señorita” to the stage, dripping with anticipation. Inches away from a kiss, the two toyed with the moment, ultimately offering an Eskimo kiss of sorts before the camera panned away to an applauding crowd. It’s not a confirmation, but we’re still struggling to breathe.

Looking for that @ShawnMendes and @Camila_Cabello SMOOCH like @joejonas at the end of #Señorita!👀 #VMAs pic.twitter.com/VMoXl8obsW

Video Of The Year

“You want a world where we’re all treated equally,” Taylor Swift explained as she accepted the award for Video Of The Year. Her “You Need To Calm Down” clip ends with a petition for the Equality Act, which Swift explained has been signed by five times the amount needed to require a “response from the White House.” Things, just. Got. Interesting.

Black and white and back-lit, Miley Cyrus emerged with a string section for her emotional new song “Slide Away,” taken from the pages of her own experience. The singer who recently split with Liam Hemsworth, punctuated the performance with a hanging “time to let you go,” that you could feel through the screen.

Nothing but *flawless* vocals from @MileyCyrus during her #VMAs performance pic.twitter.com/ZeoyZuRNJk

Both H.E.R. and Normani brought empowerment to the VMAs stage, offering their own take on being strong and slaying. For H.E.R. is was a refusal to obey labels and ideals, and for Normani it was a full embrace of her own power. Both set sterling examples with two distinct different moods.

ALL OF US DANCING TO @Normani!!!!!! #VMAs pic.twitter.com/DbeEFrGI9A

Setting Springsteen aside, MTV instead honored the Hip Hop legacy of New Jersey. Queen Latifah, Naughty By Nature, Redman, Fetty Wap, and Wyclef Jean led the arena through a history of Garden State flows as a fitting finale to the 2019 VMAs. Hey. What's up. Hello.

You can find much more from the 2019 MTV Video Music Awards here.