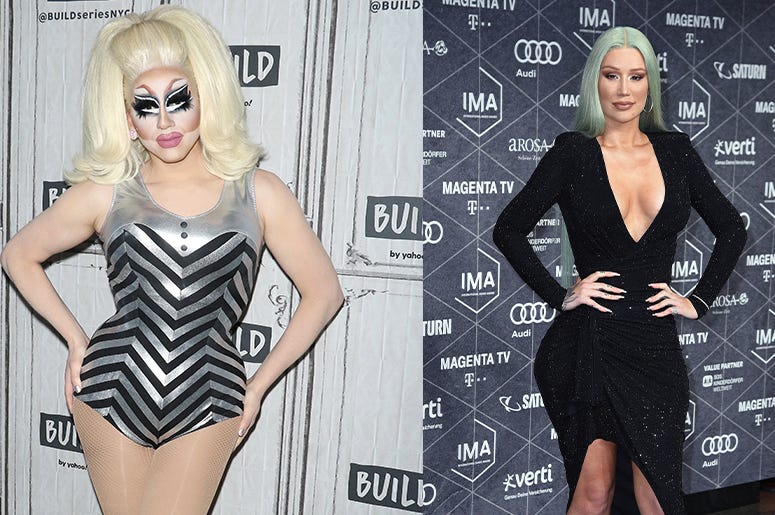 Superstar drag queen, beauty mogul, singer-songwriter, and iconic purveyor of over the top Barbie looks, Trixie Mattel, sat down with Iggy Azalea in order to get into matching “Trixie” drag looks. Aside from using Trixie Cosmetics from the drag queen’s beauty empire, the two stars used various other products to achieve the “painting for the back row and the check-cashing place down the street look” look.

The “Dance Like Nobody’s Watching” singer applied the signature Trixie look flawlessly, and the two ended up looking like the mother-daughter duo we never knew we needed. All Trixie and Iggy needed were glasses of sauvignon blanc featuring a couple of ice cubes, and lounge chairs at the local country club.

As Trixie and Iggy glued down their eyebrows, over-drew their lips, and caked on the eyelash glue, the two of them discussed everything from their favorite Spice Girl to teeth whitening to who Iggy’s favorite drag queens are. Plus Iggy recounted stories of when she had to do her own glam and hair. Azalea even talks about a moment where she thought she was going bald after flat ironing her natural hair too frequently… hawt.

Additionally, Trixie asks Iggy if she’s ever been asked to judge RuPaul’s Drag Race. While the pop star has been asked to judge she’s never been able to make it work with her schedule. Trixie tells Azalea that the experience is like no other. “You know when they’ll pick one of your songs for lip-synch you’ll have your wig snatched.. the intensity, the drama,” says Trixie.

Once the makeup-caked queens finished their signature Trixie beat, Iggy and Trixie showed off all the stunning angles of their successful eyeliner, contour, and lash looks.

This was the kiki we needed in 2020, and hopefully, we’ll see Mattell and Azalea back on stage soon.