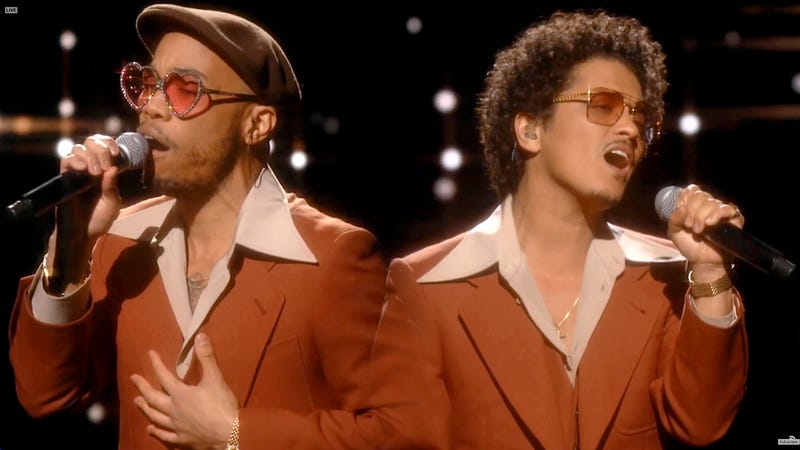 Fans waiting anxiously for a full Silk Sonic release featuring the smooth stylings of collaborators Bruno Mars and Anderson .Paak are in for some good news.

After following up their March 2021 debut single "Leave The Door Open" at the end of July with the summertime jam "Skate," Mars and .Paak have revealed that the debut Silk Sonic full length, An Evening With Silk Sonic, will arrive in early 2022, after postponing the planned fall 2021 release.

Mars tells Rolling Stone the duo would like to release more tracks as singles to let each be properly appreciated. "I don’t want to be binge-watched," Mars says. "We’re really in touch-up mode now," he adds, revealing they are still finishing up final tweaks on the recordings.

"We’ve got the bones of most of the album, so it’s really about touching up parts that need a little more… grease," says Mars. "Which could mean redoing the song from scratch!" .Paak says, eliciting laughter and nods from Mars. "Being here for another three years!" he says. "We’re not there. We were there. We had some moments in the danger zone! I think we put the pressure on ourselves by putting out ‘Leave the Door Open’ — but a deadline is important because at some point, you gotta say, ‘This is it.’ Otherwise, you’re gonna work it 'til you hate it."

The Silk Sonic release will be the first full collection of songs featuring Bruno Mars since his hit 2016 album, 24K Magic, following his 2019 one-offs with Cardi B. on "Please Me," and "Blow" with Ed Sheeran and Chris Stapleton. .Paak also released his fourth studio album Ventura in 2019.