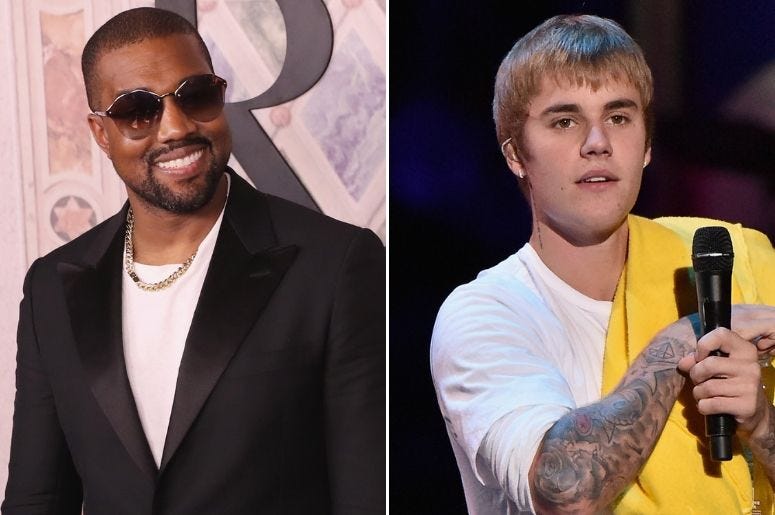 What is in the works for Kanye West and Justin Bieber?

On Wednesday, Bieber posted a photo of the two together, at first appearing to be on a set or stage with piercing lights lined up behind them. The “Love Yourself” singer made no reference to West, and captioned the photo with lyrics from “Drowning” by A Boogie wit da Hoodie.

In a follow-up photo, Bieber and Kanye are joined by Ray Romulus. The producer is part of the production team, The Stereotypes, who have worked on songs with Bruno Mars, Cardi B, and Iggy Azalea. They also produced “Somebody To Love” from Bieber’s My World 2.0 album in 2010.

More recently, Romulus has also posted photos from Kanye’s Sunday Service. Could this be a friendly connection with great lighting, or is something more?

According to The Blast, the photo op between the two artists might have just been a case of being at the right place at the right time. The amazing lights are not from the set of a music video, but rather part of teamLab Borderless, a digital art museum in Japan. Bieber is currently in the country supporting his wife, Hailey Bieber, while she works.

Kanye appears to be in Japan on his own adventure along with Romulus, who is not only a producer but also the husband of Tracy Romulus, who works with both Kanye and Kim Kardashian-West.

So it’s not new music and is just vacation photos? Probably.

In the meantime, both Bieber and West have been working on new projects outside of music. Earlier this week Kanye began work on “community housing” domes on his property in Calabasas. In previous interviews, West has said the domes will hopefully be used to house the homeless, stating a desire to break down the barriers that divide the classes.

YEEZY Home in the works! Each building is about 50 feet high. "Sources familiar with the project tell TMZ ... Kanye is building dome-like structures that are prototypes for a new type of home ... homes he believes will break the barriers that separate classes ... namely, the rich, the middle class and the poor." #yeezyhome

Elsewhere, Bieber is continuing to ramp up his Drew House clothing line. The collection is mostly sold out, but JB and his wife still represent. On his Instagram Story on Thursday, Bieber flashed a new chain with the Drew House logo, reportedly purchased in Japan.

news
Will you still need to wear masks at chains like Walmart and Target? This is where 15 major retailers stand
music
Tracee Ellis Ross responds to ‘Black-ish’ coming to an end next season: ‘It’s gonna be a good one!’
sports
'Dark Side of Football' series to feature episodes on Bill Belichick, the Browns and more: report
news
Ivanka Trump displays toned abs in sports bra and leggings on beach stroll
sports
MLB insider considers Yankees the ‘most logical’ landing spot for Trevor Story
<a href="http://www.audacy.com/articles/abc-music-news/katy-perry-releases-electric-to-celebrate-pok-mons-25th-anniversary?article=curated" class="trending__item__link spa-link" data-track-type="article-link" data-track-component-name="trending" data-track-page