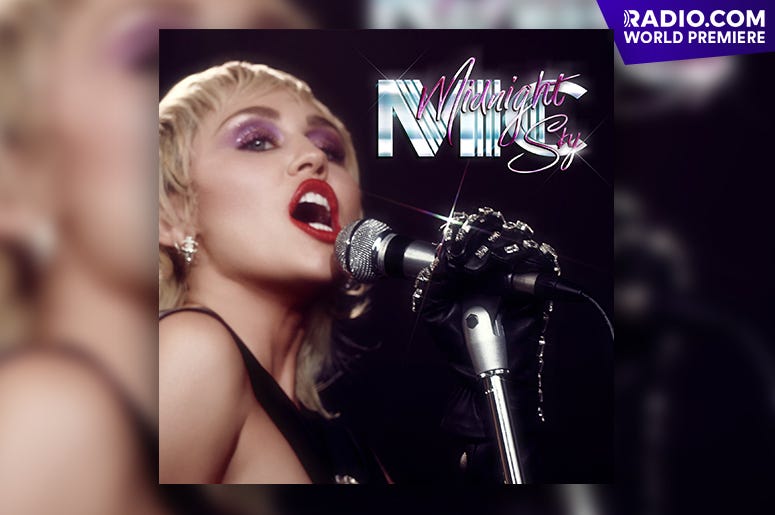 Ya’ll it’s “for real” finally time for some new music from Miley Cyrus. After waiting for what seems like forever, followed by a week of teasing, Miley’s single “Midnight Sky,” along with it’s titillating music video has officially dropped, and trust, it’s every bit the 80’s disco wet dream we anticipated.

“Midnight Sky” is a RADIO.COM World Premiere, which means you can hear it all throughout the day on Friday August 14, right here and on the RADIO.COM app.

As of midnight Miley has officially reached the end of her metamorphosis and a new era for the pop star is officially underway. “Midnight Sky” is just the first taste of what has been promised to come from Ms. Cyrus since way back in May 2019, when she vowed to bestow us with three consecutive EPs “…3 drops! 6 songs , 3 EP’s ! SHE IS COMING / HERE / EVERYTHING all to make up 1 album #SHEISMILEYCYRUS.”

With that tweet came the first drop, She Is Coming, and now, with the release of her latest single, we can officially say “SHE IS HERE,” well kinda, she’s almost here, a few more songs to go. Regardless, we’ve waited long enough for her to arrive and we’re seriously losing our minds over Miley’s new vibe. Look, we know she’s been rocking the lady mullet for a few months now, but it’s different seeing her latest persona actually come to life.

Seriously, don’t even get us started about the low-fi visual masterpiece that is the “Midnight Sky” music video (which btw Miley directed herself)… well okay, if you insist.

Belting out “I was born to run, I don’t belong to anyone,” which we already knew - Miley commands our attention whether she’s decked in designer couture and being extra friendly to her mic stand or scantily clad, dripping in diamonds, while nonchalantly posted up in a pool filled with gum balls. What do you expect? She’s just being Miley.

Throughout, Miley gives us disco queen realness, particularly in one scene where she’s dressed in a sparkly purple dress featuring one epically long slit (think Angelina Jolie at the 2012 Oscars), while she serenades us under the light of a disco ball, surrounded by brightly colored animal statues. She drives the song title home, letting us know “the midnight sky is the road I’m taking.” Well girl, we have just one question. Can we come? By the end of the video we were actually salivating, no lie, and we have a feeling you will be too.

Watch the video for “Midnight Sky” above, and be sure to listen for it all day on your favorite RADIO.COM station.