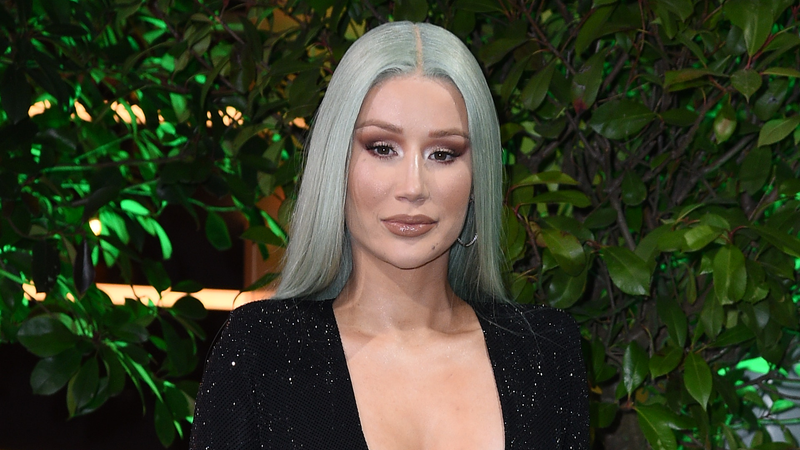 Despite being away from the spotlight in the recent years, Iggy Azalea has stayed present on social. Which is actually exactly how she announced the debut of her very own fragrance line, and in doing so gave us a major Jessica Rabbit moment that we will proceed to obsess and talk about.

With her last full project being 2019’s In My Defense, Iggy took a brief pause for music to spend the last two years raising her and Playboi Carti’s son Onyx. But what we didn’t know was that she was also secretly working on her very own perfume line Parfum De Azalea. Surprisingly launching the fancy new line’s first fragrance, Devil's Advocate, today (June 1). Less than 24 after she alluded to it on Instagram.

Showing off her long red locks, smokey purple eye shadow and shiny red lips, Iggy shared the news while teasing that the cartoon character is exactly what she was going for, she captioned a clip of her in the look: "I'm not bad - I’m just drawn that way. Feeling hype and nervous as hell all day long. Cant really believe my fragrance company launches tomorrow, never kept a secret so long in my life lmaoooo."

"It’s representing that unabashed, unafraid, naughty side of yourself," said Azalea of the devil imagery illustrated on the sleek, dark bottle in a new interview. "It’s meant to be a reflection of that naughty, cheeky, almost the devil on your shoulder or that part of me that says, like, 'Just do it, just go, just have fun, go out with your friends that night, double text the guy,'" the rapper went on."It’s about embracing the duality of yourself."

While Iggy was all dolled up for the announcement, her vibe for the scents campaign visualizer was less Jessica Rabbit and more American Horror Story. With Iggy stripped down and rubbing up against a latex dressed devilish dude, which you can see for yourself right here.

Obviously people got excited and the internet did its thing leading the Aussie native to trend shortly after unleashing the promo video for the aptly named scent. Once again, we scrolled through and picked some faves, so you wouldn’t have to. You’re welcome.

when category is face and body, iggy understands the assignment so well. pic.twitter.com/XH7qUr1dS5

Me when I use Iggy's perfume for the first time. "I feel rich already!" #DevilsAdvocate #IggyAzalea #Started pic.twitter.com/nufoapsl4g

Can’t wait for me to be like this with my bottle of your perfume! pic.twitter.com/bgpOFrESRL

Stanger in public: *sniffs* Is that the new Iggy Azalea perfume?

Me: Why yes, yes it is pic.twitter.com/lw9Dv4gurA