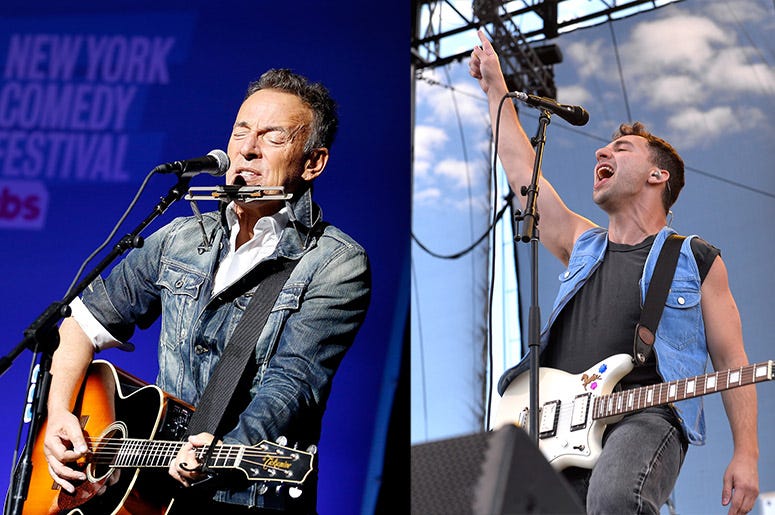 Bruce Springsteen and alt-pop group Bleachers have teamed up to deliver an acid washed trip through small nostalgic moments in the new music video for “Chinatown.”

Technicolor tones bleed onto the campy footage of lead singer Jack Antonoff cruising down the I-95 corridor in cream tinted, retro Chevy Deville, top down. Alternate shots cut away to the singer wearing an old cutoff basketball camp shirt, belting lyrics into the lens.

Mid-way through The Boss rides shotgun and trades off chorus lines with Antonoff, still cruising down I-95, sun flaming out in the distance.

In a press release, Jack described the project as a visit “back to the place I am from mixed with terror of falling in love again.” There’s an overwhelming sense of loss in each lyric, harkening back to a nostalgic period of love and discovery. He continues… “Having to show your cards to someone and the shock when you see them for yourself. Thinking you know yourself and where you are from….”

“Having to see yourself through somebody who you want to stay…”

WATCH MORE: Bruce Springsteen's Emmy Nod Gets Him Step Away From EGOT Status

The band also dropped a single “45.” Both tracks are included on their upcoming 2021 album. It’s been three years since Bleachers dropped a new album. 2017’s Gone Now was a crowning achievement for Antonoff. Since then, he’s collaborated with big names like Taylor Swift, Lana Del Rey and The Chicks.

Meanwhile, Springsteen has spent the last year reuniting with E Street Band members for his new album Letter To You. It’s a collection of nine new Springsteen tracks, including three previously unreleased 1970’s songs: “Janey Needs a Shooter,” “If I Was the Priest” and “Song for Orphans.”