This weekend the music world honored the legacy of Neil Peart, the drummer and force behind the band Rush. The Rock & Roll Hall of Fame member passed away on January 7 after a battle with brain cancer, but leaves behind a lifetime of influence for several generations of drummers, and beyond.

Two of those that have felt the impact of Peart, are Dave Grohl of the Foo Fighters and Danny Carey of Tool, both of whom paid tribute to the iconic stickman over the weekend. 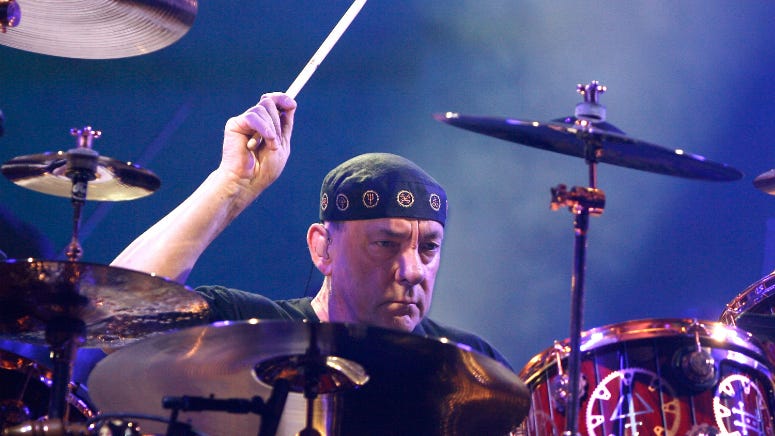 For Grohl and Foo Fighters’ drummer Taylor Hawkins, it was especially personal for the pair that inducted Rush into the Hall of Fame back in 2013. The two posted a message with some memories of Neil, lauding his skills and impact.

“Today, the world lost a true giant in the history of rock & roll. An inspiration to millions with an unmistakable sound who spawned generations of musicians (like myself) to pick up two sticks and chase a dream,” wrote Grohl. “A kind, thoughtful, brilliant man who ruled our radios and turntables not only with his drumming, but also his beautiful words.”

“His power, precision, and composition was incomparable,” he continued. “He was called ‘The Professor’ for a reason: We all learned from him.”

Hawkins meanwhile kept it simple, saying “Neil Peart had the hands of God. End of story.”

For Carey and Tool the tribute came in a different way, during a stop on the band’s Fear Inoculum tour in San Diego on Friday. During the set, the group subbed in “A Passage to Bangkok” from Rush’s 2112 into the setlist, and exited the stage to the album’s title track after the show. For Carey, he performed his nightly drum solo “Chocolate Chip Trip” with a picture of Neil Peart projected behind him, looking over him.

Carey and Peart previously jammed together along with The Police drummer Stewart Copeland in 2015, for a video called “A Little More Noise.”

Peart is survived by his wife, Carrie, and daughter, Olivia. Rush closed out their final tour in 2015.