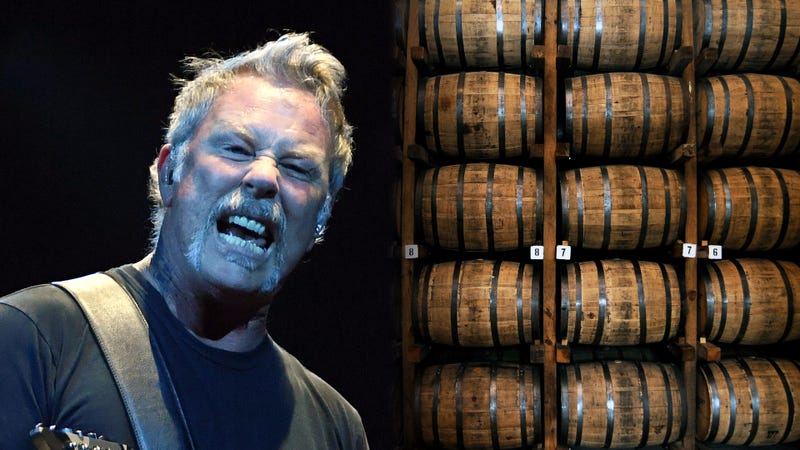 2021 marks the 30th anniversary of Metallica's self-titled 1991 album, affectionately referred to as The Black Album, and they’ve decided to make their Blackened American Whiskey a part of the big celebration. Master Distiller and Blender Rob Deitrich joined Audacy to take us into the casks that birth this unique spirit with the sounds of the hardest rocking band in the business bouncing around between the boards.

"What's really cool about it is that the band had actually reached out to their fans to see what their interest was," Rob tells Audacy. "I think resoundingly they wanted a whiskey... The approach that the band took was, they're experts at their craft; they're experts at thrash metal and monsters of metal, but it was important for them to seek out a master of the whiskey craft."

Metallica released the branded Blackened American Whiskey﻿ back in 2018 with the help of Dave Pickerell, considered one of the founding fathers of craft whiskey-making whose fingers as Rob says, "have been in countless brands all over the country." Rob joined the project as Master Distiller and Blender after the passing of Pickerell, overseeing the sourcing, blending, and cask finishing of the barrels for each batch.

What makes this spirit so unique is the way they use low-frequency sound waves of the band's songs to penetrate the wood casks during aging which affects the entire process. Each run of bottles gets its own unique playlist created by the band members, with special batches offered as box sets and commemorative collectibles. "This is where it gets really exciting," says Rob. "We're taking incredible whiskeys that already stand well on their own, we're blending them together, we're doing a cask finish in black brandy barrels -- and at that point, we're doing what we call BLACK NOISE™ sonic enhancement to the whiskey inside the barrels. What that does is it moves the whiskey vigorously in and out of the barrel at a very rapid pace. When you look at a sound wave you're seeing the peaks and valleys, all that is motion, that movement. So, every batch is going to taste a little bit different just because of the songs that were selected to enhance that batch. It certainly has an effect on the whiskey."

Luckily for "whiskey nerds" like Rob who may not have heard of the sonic enhancement process before, once he was aware he went "down the rabbit hole" and did some research. Aside from the general aging of a whiskey which moves in and out of the porous wood of its barrel depending on temperature changes, there is way more at play here. "What's really fascinating is the science behind this," Rob says. "If you've ever been at a concert and you walked in front of a speaker -- you feel that vibration, that movement in your chest. Basically, that's called 'acoustic cavitation.' It's literally moving your body -- that is what we're doing inside the barrel. When you char the wood, all those natural sugars, those vanillins in the wood will create a band of sugar and caramelized flavor. In normal aging, it's moving in and out of the barrel picking up those flavors. When you're enhancing it, the way we are doing it, it's aggressively moving in and out at a rapid pace."

Rob says he's always looking for new innovations and drawing inspiration for more projects with the band from their music as well as the whiskey itself. Upon brilliant suggestion, we might add, Rob said perhaps a "Live" whiskey could be in the cards, and maybe (but probably not) a Kill 'em All hand sanitizer (hey, distillation is distillation!). "The sky's the limit. That's whats great about working with artists," he says. "They're incredibly creative, they're always thinking outside the box... So, I really don't feel like there's limitations on any type of possibility."

Metallica's 30-year, best-selling Black Album milestone is now being immortalized in the water of life with the full, 12-song tracklist getting blasted into the casks for a limited run. "We tried to identify with the limited edition 'Black Album' whiskey pack using some of the iconography from the 'Black Album' in the packaging. It really kind of embodies the spirit of the album itself, which is a lot of fun."

To learn more about Metallica's celebratory 'Batch 114' of their Blackened American Whiskey watch as bassist Rob Trujillo breaks it all down, including the treats inside, in his unboxing video below. Drink responsibly.