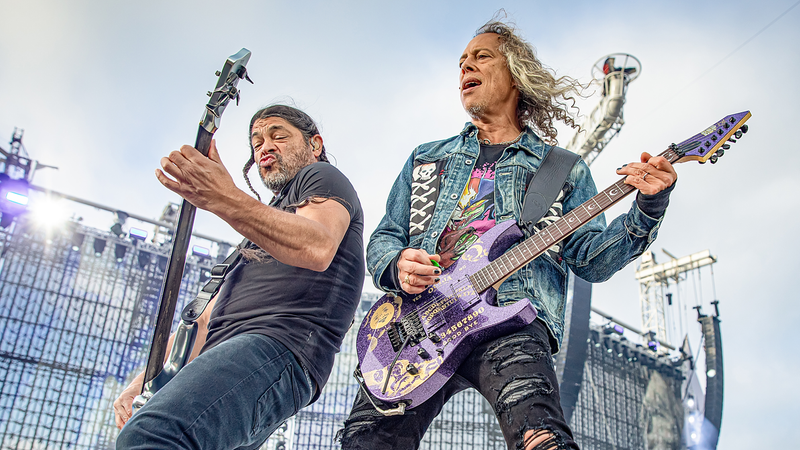 You don’t have to be a Metallica fan to know that as a band, they’ve reached heights that warrant legend status. However, according to guitarist Kirk Hammett, the band has not yet peaked.

Together with the bands’ bassist Robert Trujillo, the proud Bay Area natives made an appearance on NBC Sports ahead of a July 22 game between their hometown favorites San Francisco Giants and rival Los Angeles Dodgers.

Speaking with George Kontos, game analyst and former MLB pitcher, all about the band’s upcoming 40th-anniversary celebrations - the Metallica guitarist and bassist, respectively, each expressed that despite the 4 decades filled of achievements, the heavy metal pioneers aren't done rocking just yet.

“Man, it’s crazy when I think about four decades. ‘Cause I swear to God, it seems like just yesterday that we were on a tour bus somewhere in the middle of America, just trying to keep up with everything. And nowadays it’s just… Forty years passed so quickly. It’s amazing."

Speaking of, Trujillo made sure to mention Metallica has zero issues when it comes to fresh material from Metallica -  saying, "You know, what's insane about all this is that there's no shortage of musical ideas and riffs and grooves and bass lines. A lot of times when bands have been around that long, there is a shortage — people run out of ideas — and we have the opposite problem; we've got too many ideas. So it's a good problem to have."

While forward-looking, the musicians find themselves in a reflective mood, especially with 40 years to look back on. Prompting Metallica to release a remastered version of their landmark 1991 Black Album on Sept. 10, which will include deluxe editions of the enhanced effort now available to pre-order on the group's website.

Then, scheduled to take place Dec. 17 and 19 at San Francisco’s Chase Center, Metallica plans to rage for a set of two hometown shows for its fan club members. Each night will feature a different setlist, and tickets will be available for sale only to registered members of Metallica’s Fifth Member fan club through a lottery system.