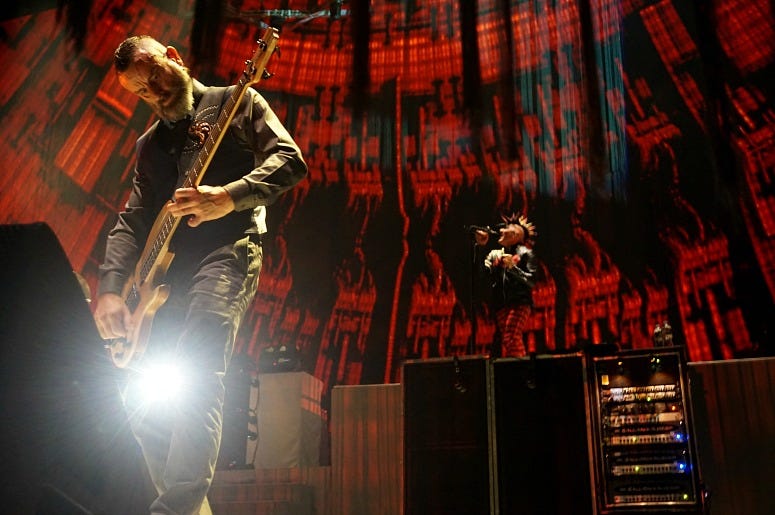 It’s a misconception to think Tool went away. The pioneering powerhouse has been playing shows and touring the country steadily before their latest run, but there’s a renewed urgency and importance to the stops they are making now.

It’s easy to see why, with the progressive icons offering up their fifth album in August. Fear Inoculum was not only the band’s first release in thirteen years, but also it marked a new more open and available version of a group that sometimes felt bunkered in by their own design. For the first time all of their music has been made available everywhere, and in return the group feels more omnipresent in the world of Rock than ever before. It has set off a spark and shined the light for some who needed reminding, that Tool if a force and a universe all its own.

We had a chance to check out one of the dates on the Fear Inoculum Tour, and we were transported into a complete experience, lost in a world built on a blend that’s both proficient and aggressive. In a swirl of sound and imagery all connected, musicianship reigns and senses are exploded.

Much has been made of the “no photo” policy the band has instituted on tour, giving plenty of advance warning that fans could be ejected if seen taking pictures during the performance. Around the arena, people attempt to sneak shots like contraband, contorting to hide their need for a camera roll remembrance. Once you get over the reflex to reach for your phone, it actually is an important exclusion from the experience. Tool has constructed something with their current live set that is meant to be engulfing and overtaking, a fall down their own personal psychedelic rock rabbit hole. To not be a part of that in real time would be a miss, so what starts as oppressive seems ultimately like a favor.

It is a funny sight once the ban is lifted though. Before the final song, Maynard James Keenan offers everyone a release from the rules. “Last song. Whip ‘em out. Security stand down,” says Kennan, almost resigned by the situation. With that lights flicker across every corner of the room, as a sea of screens get removed from pocket purgatory. “Notice the difference. Thank you for coming,” he adds. 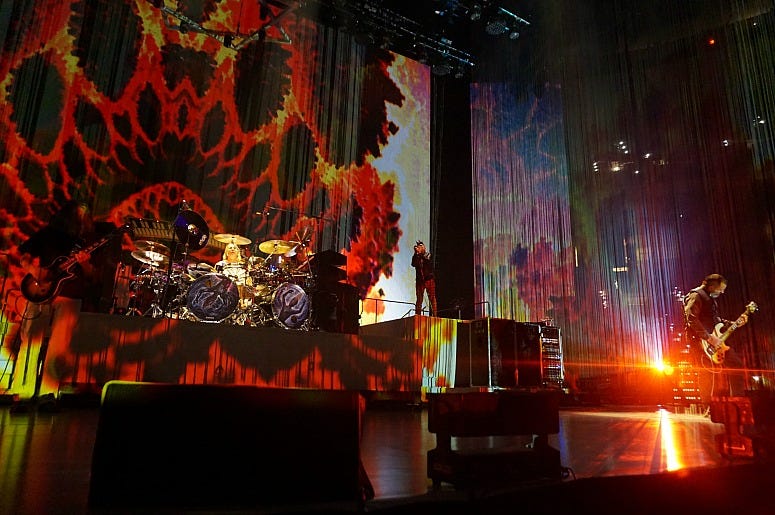 It becomes clear early on that Tool isn’t here to play songs, they’re here to play an experience. Seizing your senses, the band plays in front of a giant visual wall, with images bleeding and folding into each other. Eyeballs that become animals and skin that becomes thread and bugs that become people and the whole world eating itself. It all plays out as Tool provides the score.

As colors and anatomy intertwine behind them, each member of Tool shows up for their role in this evolving world that’s taking on one arena at a time.
It starts with Danny Carey, who sounds like an absolute madman behind the drums but approaches it with a martial arts mindset, calm and calculated even at his most furious and impressive points. Adam Jones seems unfazed or so completely in the groove that he’s gone blind to the rest of the world, churning out sounds you never knew a guitar could make. Meanwhile Justin Chancellor rocks back and forth, fully consumed by the moment and you can see it in every step.

Then there’s Maynard. On two risers at the back of the stage, the singer paces like an animal in a cage, crouching like he’s ready for a fight and bursting in effortless blasts of expression. His mohawk is blazing, stark against his black leather jacket. He sometimes looks like he’s been captured and is plotting his revenge, but at other times he is clearly pulling the strings and is the glue of it all. 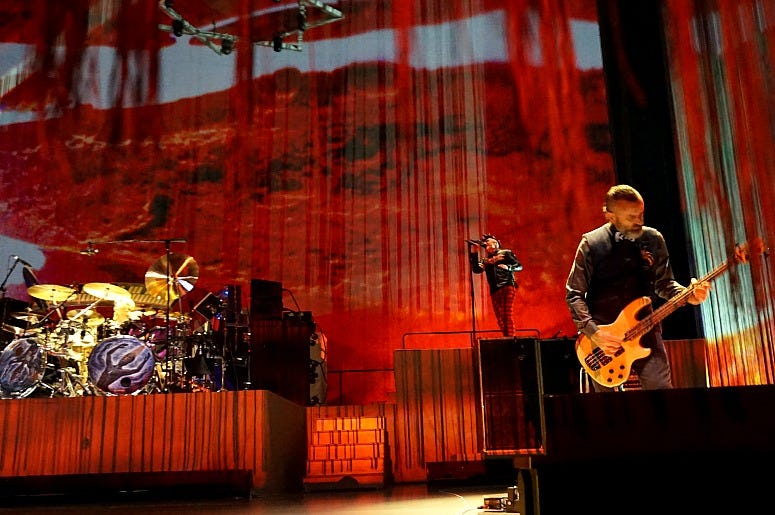 Through it all the crowd rides the wave, as the new songs of Fear Inoculum settle in seamlessly beside those from a decade or more before. It’s all cohesive and a part of the same ride, but when moments like “Schism” and “Jambi” hit back to back, the crowd lifts off to new levels and never completely comes down. No one stands taller than the others though, these ultimately are not songs, but an experience.

Tool continues the Fear Inoculum Tour across the US into February. You can find the full list of dates here.