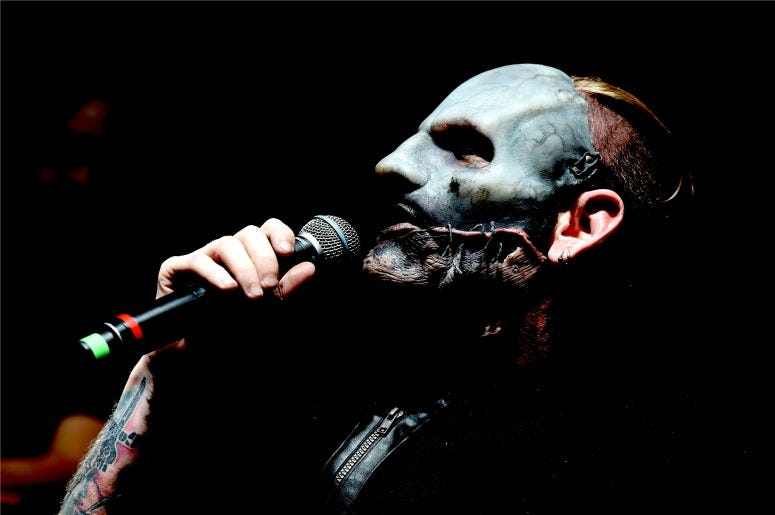 Slipknot promised maturity in the lead up to We Are Not Your Kind, the band’s 6th album and first in 5 years. More than mature, the Iowa outfit expands and refines their already trademark sound of punishing riffs and urgent vocals, by allowing themselves to wander into new sonic landscapes while tightening the grip on what they already do so well.

It’s been 20 years since we first met Slipknot, and behind the masks they’ve evolved on their way to 30 million sold. However, through a dark writing process filled with personal strife for frontman Corey Taylor and the luxury of time to craft an album experience they deliver their biggest leap yet.

The band remains as brutal as ever, driving through a one-two combination of lead single, “Unsainted”, and “Birth Of The Cruel” to kick off We Are Not Your Kind. Both have plenty of throat-ripping necessity and commanding musings.

“I'm just weathering a rough patch. Another villain with an itch to scratch,” sings Taylor. “Denial is the darkest when you live in a hole. Why does the hell make you feel so cold?”

Both come fully loaded with Slipknot boot-to-the-face intensity, but with uncommon flourishes like a soaring choir. Elsewhere, there’s also new clarity and exploration. A classic chorus breaks through the aggression of “Critical Darling”, for a radio-ready takeover. On “Spiders”, Taylor bounces off of haunting, twinkling keys with some personal reflection. “Your real world isn't ready to face the face behind the real me” he sings. “Time to think it over, I'm over trying to overthink.”

We Are Not Your Kind is a complete and total experience, benefiting from the distillation of Slipknot’s greatest traits and a willingness to expand in sincere ways.

Slipknot are currently continuing their Knotfest Roadshow tour, along with Volbeat, Gojira, and Behemoth. You can find the full list of upcoming dates here.

We Are Not Your Kind is now available everywhere.