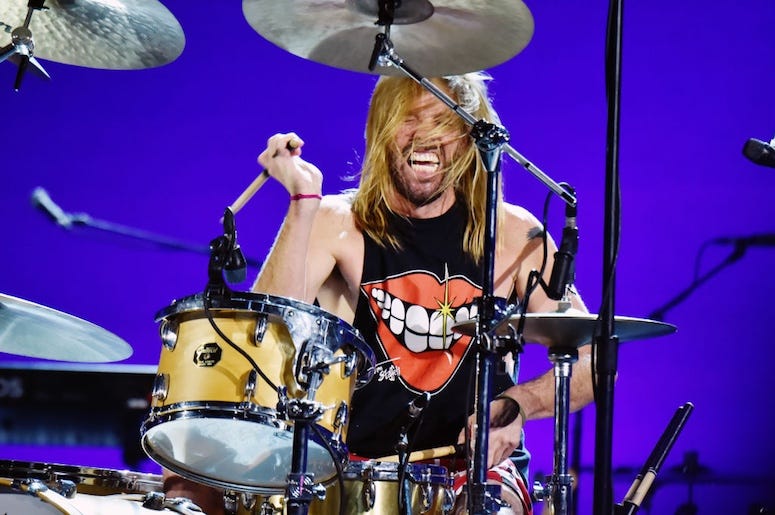 There’s certain bands that function so well as a unit that if you removed one member it’d be nearly impossible to replicate their sound, style, and chemistry. Rush is one of those bands.

Following the passing of Neil Peart this past January, Geddy Lee and Alex Lifeson have remained pretty quiet and out of the public eye. Back in July, Lifeson spoke with Audacy and detailed how it’s been difficult to find the inspiration to play music again. “After Neil passed in January, I've played very little guitar. I don't feel inspired and motivated,” he said.

On top of that, Lifeson doesn’t know whether he would want to get back on stage with Lee to perform again. “I don't know if the motivation is there for us to really do anything now,” Lifeson admitted.

If there’s one fan, and that may be an understatement, that would want to see the surviving members of Rush on stage again, it's Taylor Hawkins. The Foo Fighters drummer spoke about his love of Neil Peart and Rush in an interview and desire to see Lee and Lifeson on stage again.

“I hope that Geddy and Al play together, and I hope they can find someone to do something with them," he said.

"But no one will ever be Neil Peart; it's just impossible. And I think Geddy and Alex know that, and they feel the same way. But I want them to play. I really, really do. I know they wanna play." He then clarified: "I don't know that, like, personally, but…"

Although Peart’s presence would undoubtedly be missed, Hawkins thinks the duo would “probably try a different sort of style.”

Although he didn’t come outright and say he’s volunteering for the spot, Hawkins certainly has the credibility to step in on drums. For one, he’s vastly familiar with their catalog. Foo Fighters have covered Rush songs numerous times in concert and even inducted the band into the Rock & Roll Hall of Fame back in 2013. During that 2013 induction ceremony, the Foo Fighters opened their performance with a rendition of “2112” before Rush came out on stage to join them.

Additionally, Hawkins has built a little bit of chemistry with Lifeson and Lee. During a 2008 concert in Toronto, the Foo Fighters shocked fans when they brought the Rush duo out on stage. After Hawkins delivered a fiery drum solo, Lifeson and Lee joined in to perform “YYZ.”

The execution was fantastic and Hawkins clearly held his own with the two rock legends. Whether or not Lifeson and Lee want to take the stage together is one thing. If they do, they may want to give Taylor Hawkins a call.