Amy Lee of Evanescence joined RADIO.COM for an exclusive FANDEMIC Instagram Live, answering questions from around the world and letting us in on her time social distancing. Checking in with RADIO.COM's Taryn Daly, the GRAMMY-winning singer explains how she and the band are handling these days under lockdown, and what fans can expect as far as more music in the near future.

Best known for 2003's "Bring Me To Life," Evanescence recently shared their first new music after nine years out of the spotlight earlier this year with the track "Wasted On You." Today, August 14, a brand new one is available with singers Taylor Momsen of The Pretty Reckless, Lzzy Hale of Halestorm, Within Temptation’s Sharon den Adel, violinist Lindsey Stirling and guitarist Troy McLawhorn’s wife, Amy featured on the track which will be on the band’s upcoming studio album, The Bitter Truth.

Also featured on the song are Amy’s sisters Carrie South and Lori Lee Bulloch, as well as friend and co-writer Deena Jakoub from the band Veridia.

On top of joining forces with voter registration organization HeadCount for the Use My Voice campaign, which is encouraging US citizens to check or update their registration status ahead of the upcoming election, Amy says she was also excited to join up with some of her female counterparts on the new project. 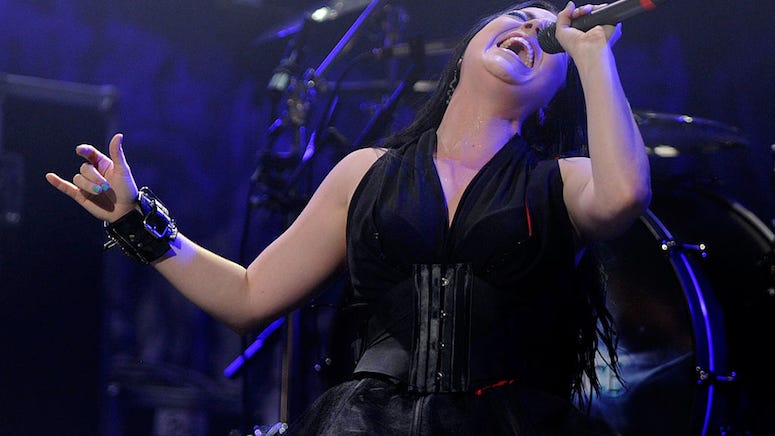 “I am so fortunate to have such incredibly beautiful, talented friends,” Amy tells RADIO.COM. “Actually Deena, one of the ladies that is singing on the song from the band Veridia, we’re close friends. I had her come over one day because I was writing and had that song bubbling for a while and was sort of stuck on the chorus. I was just talking through it with her and she totally helped me write that chorus and breakthrough on finishing the song.”

“It so much from the get-go had to do with leaning on my girlfriends, that meant so much. When we wrote that call I was like, ‘this needs to be a bunch of people, and not just any people they should be real people like my real friends and family,’” she admits. “I know so many rad, amazing women and it was just fun. It’s been so cool watching it all come together.”

Getting a bunch of singers into a recording booth amid a pandemic certainly wasn’t in the cards for this project, so Amy and the crew did what the rest of the creative world has been forced to do – get a Zoom account.

“We all live all over the place, so mostly the girls just recorded themselves, sent the audio to me and we piled it all up together,” Amy explained about the recording process. “Just to feel their support in a song that is different thematically for me and for us as a band. It’s stepping out and up in a new way – just feeling that support in that music feels so great. I’m so grateful to them.”

Jumping into the questions that Taryn gathered from around the Internet, one major thing on fans’ minds is the release date of The Bitter Truth. “It’s kind of out now,” says Amy, “if you want to think of it that way. The way that we’ve been releasing the songs, I didn’t want it to be traditional… I sort of wanted it to be like ‘we’re all in this together…’ We’re still writing, we’re still creating right now, we’re still in the studio. There will be a time where it’s like, ‘here’s the rest of it.’ I don’t know when exactly that is.”

Earlier this year, Evanescence dropped their cover of Fleetwood Mac’s classic “The Chain.” As far as future covers, Amy says the band would be open for another classic track. 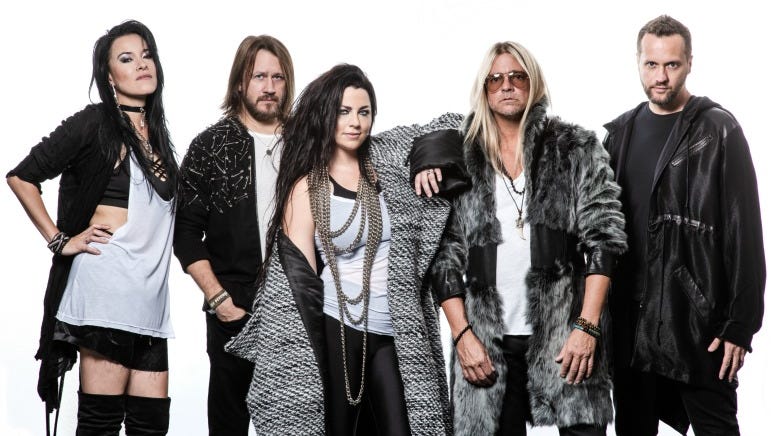 “We kind of went thru a little Beatles renaissance the past couple of years,” she admits, remembering back to the band’s Synthesis tour when they did their own version of “Across The Universe.” “It was very different and orchestrated beautifully. The power of performing that song was so cool. I’d like to do a studio version of that.”

Fans will definitely snatch up that cover if it ever sees the light of day, and Amy is grateful for the overwhelming support the band’s followers have given them over the years. “I mostly feel overwhelmed in a really positive way, especially when we can be in person,” Amy says about the adoring crowds.

“Our meet and greets have become something that give me a lot of life, and inspiration, and motivation at our concerts. So many of them offer up really personal experiences, and stories, and ways that the music has been a part of their life and their journey. That’s inspiration for me. Having a tear come to the eye during a meet and greet is almost part of our day. So yeah, it does get overwhelming. It’s a wonderful thing.”

Although concert, and the accompanying meet and greets are now on hold due to quarantine, Amy says she’s been hard at work getting the band in the same room again. “It’s been a little tricky. We had been working a lot remotely, which is normal,” Amy admits. “I like to get in zone by myself and write and get some kind of a start going before we get together… but we had to be in that zone for a lot longer.”

“It got to a point where I feel stuck,” she says, and the band finally got to a point where they couldn’t envision continuing the same way. About a month ago, they began looking into safely working together. Eventually, all of the American members of the band tested negative, and hopped on a tour bus to get together with producer Nick Raskulinecz in Nashville. “We just made the creation our life, and the fact that we were so grateful to finally be able to get together, and we knew how rare and precious it was to be able to make it happen, made the energy that much more intense and exciting. It just has given us a new fire and purpose in this time where music for me is saving me. It is the thing that lets me continue being who I am, and continue living like by expressing ourselves in that way.”

That musical expression is core to Amy’s life, and one that she wishes would be a little more welcoming in the entertainment world. One thing she’d like to change – genres. “I wish that there weren’t genres,” she says. “I feel like that’s something that’s kind of changed, a bit, in the future world where there’s so much blending between different things. That’s something that I love in music and that I strive to do in music... there’s categories for everything,” and that can be hard for bands like Evanescence that don’t fit into a specific slot. “I don’t know, I hate labeling. I wish there wasn’t a category. I would love it if it was just ‘music.’”

Finally Amy and Taryn, both moms got into the arduous task of keeping kids entertained amid the pandemic.

Amy admits, “I feel a lot of guilt all the time. It’s just that I never feel I can do enough for my son. I know that I can’t give him everything that he needs.” With the band always in the back of her mind, it’s hard for her to do anything but give him her full attention.

“It’s not easy being a mom in quarantine,” Amy continues. “It’s hard to take time for yourself... to work on your work, to do what you need to do. We’re all having to make sacrifices this year and you just feel bad for the kids. That sucks for kids and it’s just out of our control. So, all we can do is make the best decisions we can, stay safe the best we can, and just know that this isn’t forever.”

The stress of the pandemic is something that everyone must deal with in their own ways. For some, that means baking through the uncertainty, which Amy has tried for herself in the bread and dumpling realms. “Being productive makes me feel better, from an early age,” she says. “Anxiety, depression and all those things; the way that I’m able to self-soothe and create my own therapy is through the catharsis of creation. Whether it’s making music or making food, or painting something – whatever it is, creation makes me feel good.”

“Our music, to me, isn’t depressing music but I’ll go there. That’s kind of what we do. We go to the deepest, hardest places and for me it brings me so much satisfaction to be able to do that. Because I took something in my life that was really painful… and spun it into something that I love and something that other people can love.”

Watch the full interview above for more -- including what bands Amy would love to see Evanescence collaborate with -- and stay tuned for more exclusive chats with your favorite artists right here on RADIO.COM.