It's one of the most anticipated debut albums in rock. Now, we finally know when it'll get its release.

“It’s crazy, I never saw any of this coming.” Wolfgang Van Halen told RADIO.COM's Ryan Castle about his reaction to his debut single “Distance” landing on the top spot of the iTunes Top 100 Songs chart. At the same time, it was a bittersweet feeling for him. “It’s a cacophony of emotions that I can’t halfway unpack,” he added.

Wolfgang’s upcoming debut album is purely a solo affair. After all, he recorded every single instrument on the album by himself.

It’s a monumental effort recording each instrument on an album, something that Van Halen wanted to challenge himself to do. “Not many people do that. I think there’s a really short list of musicians like Prince, Lenny Kravitz, or Paul McCartney that do that,” he said. “But I just wanted to do it to see if I could,” he said with a laugh.

An advantage of creating the entire album on his own also gives Wolfgang the freedom to decide when it’s ready to share. While he doesn’t have an exact date, he plans on releasing the album this spring.

Although he recorded every instrument by himself, Wolfgang will be bringing along some of his longtime friends and musical companions to be a part of his live band. Joining Wolfgang will be Frank Sidoris on guitar (Slash ft. Myles Kennedy and the Conspirators), drummer Garrett Whitlock (Tremonti), and Ronnie Ficarro (Falling in Reverse) on bass.

“We’d been rehearsing as early as 2018. Dad would come to the rehearsals and it just fit the second we started to play together,” he said.

In the band, Van Halen will handle guitar and vocal duties, but revealed that “drums are really my go to. It’s where I got started.”

With a solid track record of drumming in his DNA thanks to his Uncle Alex Van Halen, Wolfgang said it was actually his dad who taught him how to play drums. 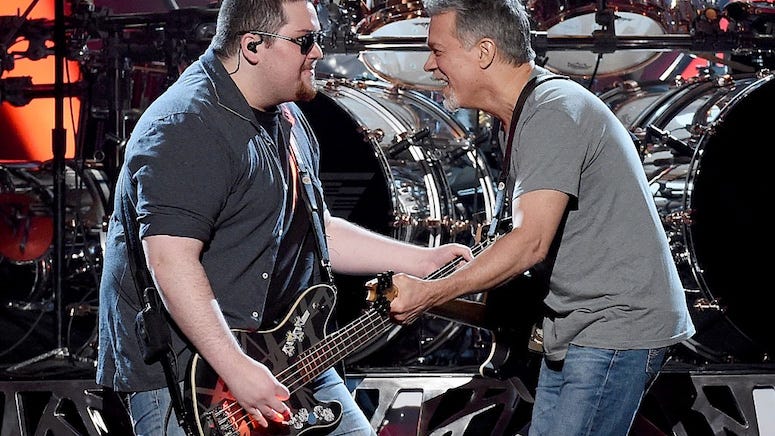 Van Halen can already look forward to 2021 when Mammoth WVH is set to make their live debut at Aftershock Festival. The turn of the calendar also presents another opportunity Wolfgang is looking to take advantage of. “To fall into Mammoth comfortably and just have that be my life,” he said.