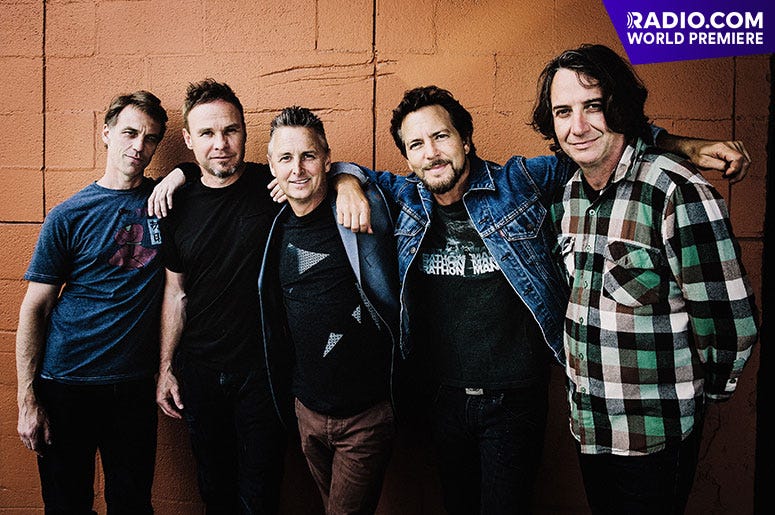 Something special has been summoned within Pearl Jam, obvious from the first snap of the bass drum and the twinkling of the synths. Channeling new wave edge with a singing snarl, Eddie Vedder emerges early on “Dance Of The Clairvoyants,” more elastic and effervescent than we remember.

Maybe it’s because it’s been six years since we’ve had a proper Pearl Jam album to look forward to, but the lead single from the band’s upcoming Gigaton instantly feels bold and infectious, and not in the typical sense for the band that’s been blazing new “truth to power” trails for 10 albums strong. The song radiates like it’s ripped from Vedder’s own Talking Heads appreciation, yet filled with a soul that’s undeniably Pearl Jam.

“Dance Of The Clairvoyants” from Pearl Jam is a RADIO.COM World Premiere, which means you can hear it here and stream it on the RADIO.COM app all throughout the day on Wednesday January 22.

The song is our first taste of Gigaton, due out everywhere on March 27. It will be Pearl Jam’s 11th studio album and first since 2013’s Lightning Bolt. The record has already been called “a long journey” by guitarist Mike McCready, as he shared in a statement with the LP’s announcement. “It was emotionally dark and confusing at times, but also an exciting and experimental road map to musical redemption.” With many wondering what a Pearl Jam album would sound like in this new era, it’s appears everything is on the table.

Gigaton. Out March 27th. Which track are you most excited to hear?

The band has also announced a North American tour, kicking off on March 18 in Toronto and stretching through April 19 in Oakland. You can find the full list of dates here.

“Dance Of The Clairvoyants” is now available everywhere.