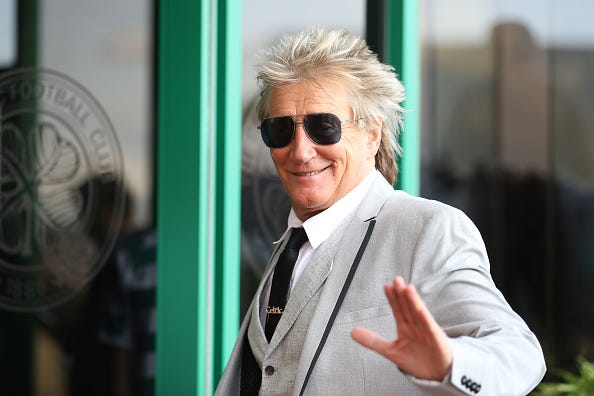 Rod Stewart is all about the ex-factor!

The 74-year-old singer achieved quite the impressive feat and posed alongside his current wife, Penny Lancaster, and three of his exes for an epic family photo, according to People.

It all went down at a 40th birthday party for the legendary rocker’s daughter Kimberly Stewart.

In the photo, Kimberly’s mother Alana Stewart stands to the left of Penny and the “Do Ya Think I’m Sexy” singer, while exes Kelly Emberg and Rachel Hunter stayed to the right.

Kelly shared photos of the group to Instagram with the caption: “#happybirthday@thekimberlystewart! Can’t believe you are 40! You looked radiant last night! #birthdaybash. A mother’s reunion!”

Combined the women are four of the mothers of Stewart’s eight children.

His oldest child, Sarah Streeter, was given up for adoption when the singer was a teenager. The father and daughter reunited in the last decade and have since formed a warm relationship.

Such a magical evening. Love you all ❤️

Kimberly appeared to have an amazing time celebrating the big 4-0 and shared a photo with her dad, step-mom and her eight-year-old daughter with actor Benicio Del Toro, Delilah Genoveva, which she captioned: “Such a magical evening. Love you all.”

Fun fact: Rod’s youngest child is only six months older than his granddaughter.

No doubt the Grammy winner was enjoying his blended family time as he’s set to get back to work on his Las Vegas residency “Rod Stewart: The Hits” on Sept. 18.