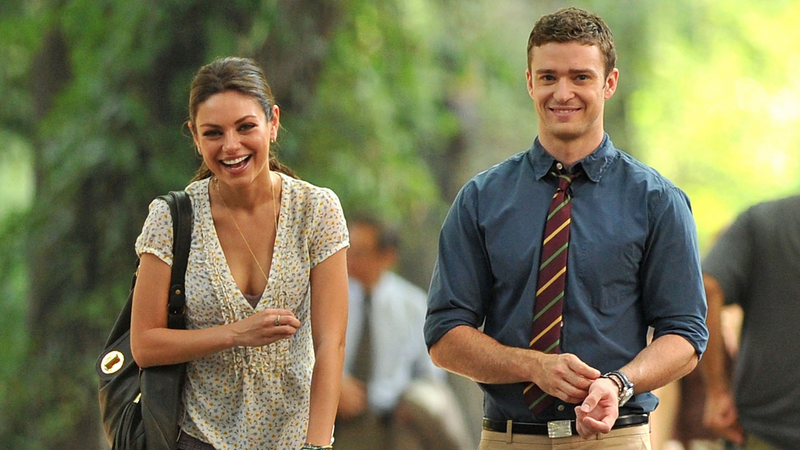 We know what you're thinking and yeah, we said it. So, get films like Crazy, Stupid, Love and That Awkward Moment out of your head. We're here to defend why we said what we said. Will Gluck's rom-com run was iconic. He had a signature style that's easy to spot and love. However, as much of a treasure as Easy A is, easily Friends With Benefits is the greatest romantic comedy of the past 10 years... Upon further research, only one other movie makes a strong enough argument to take the spot, but we'll discuss that at a later date.

This month marks the 10th anniversary of Friends With Benefits, starring Mila Kunis as Jamie Rellis and Justin Timberlake as Dylan Harper. The two met in a professional capacity, but quickly become friends and not long after friends with benefits. The film takes a honest and not clichéd approach to the troupe of best friends who fall in love.

It's sweet and downright hilarious. From the scene where they meet for the first time at the airport, where we learn Jamie reenacted a scene from Will & Grace— "ahh look at me, I'm quirky, but cute"— to the first time they decide to have "meaningless" sex, their onscreen chemistry was undeniable. When it's time for them to "play tennis," you learn that the two have been secretly eyeing the other since the day they met.

The first thing Dylan complimented her on were her eyes. She was intrigued by his lips. They exchange compliments until Dylan reiterates his attraction to her eyes. Taken aback, Jamie replies, "you say that." To which he sweetly states, "I meant it." It was in that moment where we completely swooned. Up until then, the pair exchanged witty banter as his chill LA demeanor went up against her tough NY shell. He was emotionally unavailable; she was emotionally damaged— how could they not fall for each other?

One of the best parts of the film is that the two—despite us meeting them at the end of their respective relationships—end up testing the FWB waters and start to date other people. With dating very much being a "best of luck" market, Jamie and Dylan ultimately opt for emotional support, instead of sexual gratification. This leads to them realizing their feelings for each other are beyond platonic/surface level. Yet, when Dylan retreats to his emotionally unavailable nature, Jamie is also back on the defense. With the help of some realizations from their families, the inevitable get-your-girl-back, romantic ending is in full effect. No fake Grand Central Terminal needed.

The last reason why Friends With Benefits surpasses all other rom-coms is because of Semisonic's "Closing Time." Throughout the film, Dylan is adamant that the song is from the band, Third Eye Blind. Jamie always refutes it, but it isn't clarified until the end. The placement of this song solidifies it as a love song. Funny enough, it isn't even about a bar closing. Yet, the lyric, "every new beginning comes from some other beginning's end" is the epitome of the entire film. It's both equally romantic and comedic and will be an essential watch for years to come. Luckily for all, Friends With Benefits is now streaming on Netflix and Hulu— no strings attached.