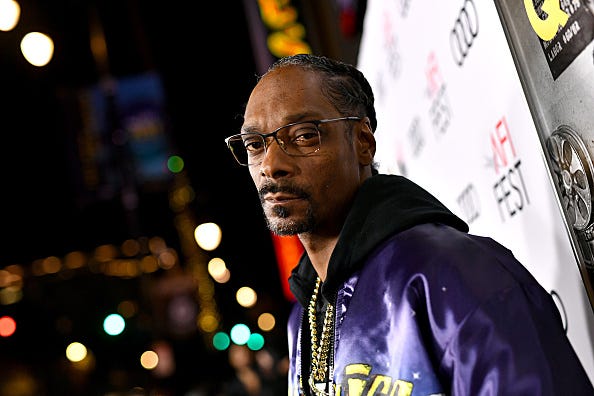 Snoop Dogg may not be People Magazine’s Sexiest Man Alive, but he’s the sexiest man alive according to his own Instagram.

The edited image appears just as Legend’s cover does, but Snoop’s head has been edited on top of John Legend’s body. He also made an effort to jazz up the bowtie a bit, swapping out Legend’s solid-colored tie for a brighter, more busy look.

The edited issue cover reads, “Snoop Dogg: How a Crip Took Your Chick.”

Snoop Dogg took his edited photo to the ‘gram to thank his fans for the honor. “Thank. You,” the caption reads. Celebrities and fans alike flooded the comments section to share their thoughts on Snoop Dogg’s ‘Sexiest Man’ bit.

“Look at God workin,” Ray J writes. He then followed up, “Wait I thought this was real lol,” unaware at first that the photo had been edited.

Some, however, saw through Snoop Dogg’s tricks, but still wished the fake People cover was a reality. Barbara Corcoran of “Shark Tank” took to the comments with her own thoughts. “Now this is something I can agree with,” she wrote. She then took to Twitter to further slight John Legend’s honor.

“The Sexiest Man Alive? You’ve got to be kidding!,” Corcoran tweeted.

The Sexiest Man Alive? You’ve got to be kidding! No doubt John Legend is a phenomenal musician, but I’ll tell you what makes a guy sexy- a fabulously chiseled face, eyes that communicate “I want you NOW!”, and a body that you can’t stop looking at. #ReVote

Despite the influx of comments from celebs and fans, John Legend himself has yet to respond to Snoop Dogg’s antics.

news
US fuel pipeline company halts some operations after cyberattack
sports
Resurgent Jack Flaherty improves to 6-0, launches 416-foot homer against Rockies
news
The best pellet grills you can buy in 2021
news
Crocs giving away 50,000 pairs of free shoes to healthcare workers next week
news
WATCH: Service member flies over the sea in futuristic 'jet suit'
news
Now may be the time to sell your old car