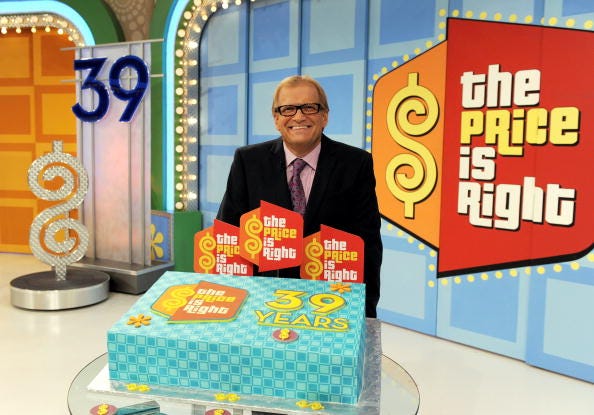 The price has been wrong a lot more lately.

A new study has analyzed over 120,000 bids on “The Price Is Right” and found that contestants have gotten progressively worse at correctly guessing the price of items over the course of the game show’s 47 years, reported Quartz.

.@DKopf at @qz on my latest paper on bounded rationality/inattention with respect to prices changing over time: “Why are people getting worse at ‘The Price Is Right’?” https://t.co/PBDDyqOwPv

During the “Contestants Row” portion of the game show, four contestants try to guess the correct price of household items like cans of soup, cleaning products and electrical appliances. The one who gets closest to the actual price without going over moves on to the next round.

In the 1970s, the average guess was about 8% below the actual price, but in the last ten years contestants have been underestimating the price by more than 20%, according to the data obtained by Harvard University analyst Jonathan Hartley.

While many contestants simply bid one dollar more than the previous highest bid, Hartley took a deeper dive and believes there are three economic factors that are contributing to people not having a clue what items actually cost today.

A post shared by The Price Is Right (@therealpriceisright)

Since inflation was higher and less predictable in the ‘70s and ‘80s, people were more conscious of what things cost since the price was constantly changing. Now that inflation has stabilized, consumers aren’t clocking costs as much.

Secondly, the rise of e-commerce sites like Amazon.com may have made people be less sensitive to price. Competitive sites have led to the cost of items being more uniform, so consumers feel less motivated to compare prices.

Lastly, there are more products available to consumers than ever. Today grocery stores have 50 times the amount of items on shelves than they did in the past, making it harder for someone to know what a particular product actually costs.

So the next time you find yourself on “The Price Is Right,” Hartley recommends that whatever you think the price is, lower your guess to have a better chance of making it to the Showcase Showdown.