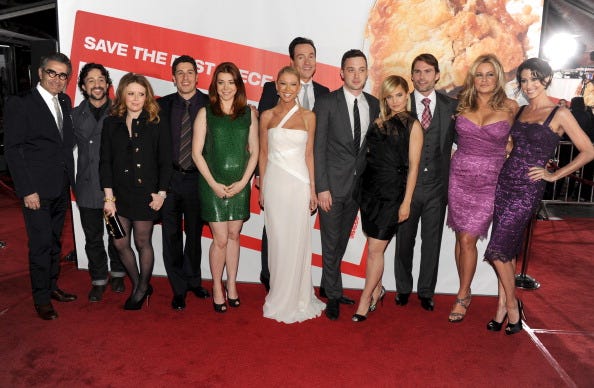 An “American Pie” mini-reunion is coming to primetime.

Jason Biggs stars on the new Fox sitcom “Outmatched” and he’s enlisting the services of a couple of his former big screen high school pals for an upcoming episode.

Biggs’ “American Pie” co-stars Alyson Hannigan and Eddie Kaye Thomas are set to appear as a married couple on an episode of the freshman series, according to Entertainment Weekly.

“Outmatched” premiered in January and has Biggs playing a blue collar father raising four children, three who are certified geniuses.

The part is a big stretch from his breakout role in the 1999 teen comedy, where he and his friends attempted to lose their virginity before graduating high school.

To commemorate the film’s 20th anniversary last summer, several members of the ensemble cast got together for an epic selfie.

In addition to Biggs, Hannigan and Thomas, Tara Reid, Chris Klein, Seann William Scott and Natasha Lyonne got in on the nostalgia snap.

“American Pie” grossed over $132 million at the North American box office and spawned three sequels, including "American Pie 2" in 2001, "American Wedding" in 2003 and "American Reunion" in 2012.

One of the franchise’s most quoted lines is when Hannigan’s character routinely says, “that one time at band camp.”

While it’s unclear if she’ll utter it on “Outmatched,” the episode is scheduled to air in March.