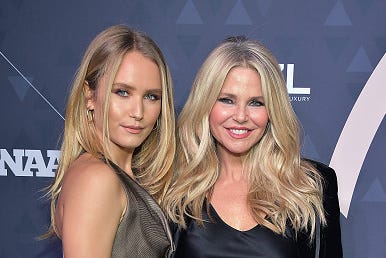 Just hours before the “Dancing with the Stars” premiere, ABC announced that Christie Brinkley would not be participating this season due to an injury.

But the show will go on as the 65-year-old’s youngest daughter, Sailor Brinkley-Cook, will step in to fill her mother’s shoes, according to People.

“While rehearsing for the premiere of Dancing With the Stars, Christie Brinkley suffered injuries which required surgery to her wrist and arm,” ABC said in a statement.

“She is unable to continue her planned participation on the show.”

EXCLUSIVE ballroom bombshell! @SeaBrinkley is out of @DancingABC before the season begins. She tells @Ginger_Zee about her injury and the moment she called her daughter Sailor to ask her to step in for mom coming up on @GMA! #DWTS https://t.co/vCu1GI9DWR pic.twitter.com/SBDoWy84Aq

“Good Morning America” shared video of the supermodel falling during rehearsals and landing on her “shattered” arm.

Sailor happened to be flying to Los Angeles to be with her mother for the premiere when she received the fateful phone call.

“I’m literally about to take off, two minutes to take off, and my mom calls me and says, ‘Sailor, you’ve got to save the day,’” the 21-year-old Sports Illustrated model told “GMA.”

Sailor then hit the ground running and learned her mother’s routine quickly over the weekend.

Christie has since given an update on her medical status while sharing Sailor’s first official “Dancing with the Stars” photo.

“I broke my arm into 1,000 pieces requiring surgery with a metal plate and screws to hold my arm together,” she captioned the Instagram post. “I’m so sorry …it was quite literally a crushing disappointment, I never want to let anyone down, so I looked for a silver lining and I think this one is solid gold.”

She added, “You know showbiz is all about getting a break and I guess you can say Sailor and I both got one on this season of @dancingabc.”