You might expect Courteney Cox would to be a “Friends” expert, but it turns out, she probably wouldn’t be much help during trivia night at your local bar.

The 55-year-old actress, who played Monica Geller on the beloved sitcom, put her knowledge of the series to the test during an at-home episode of “Jimmy Kimmel Live!”

She faced off against Kimmel’s cousin, Anthony, a self-proclaimed super fan, and it became clear that she needed to brush up on the series.

"I don't remember even being on the show. I have such a bad memory," she joked with Kimmel.

She quickly clarified her comments adding, "I remember, obviously, loving everybody there and having fun and I remember certain times in my life that I was there, but I don't remember episodes…I fail every test."

The questions were all Monica-based and asked the questions like the name of her parents, her first kiss, and who officiated her wedding.

While Cox seemed to know some of the answers, she wasn’t quick enough, and the victory went to Kimmel’s cousin with a score of 5 - 0.

Cox revealed that she’s starting to understand the hype and is figuring out what the “Friends” fandom has known for years -- it’s a great show. 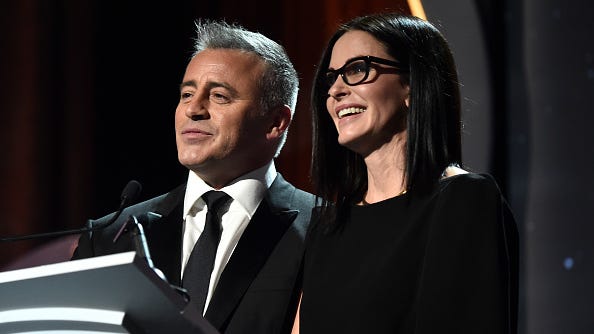 She revealed she’s making the best of her time in quarantine by binge-watching the series.

"I just started season one," she said. "It's really good."

Cox and the rest of her co-stars are set for a “Friends” reunion special at HBO Max. She said it was supposed to film earlier this week, but it was postponed due to the pandemic. No new date has been revealed.