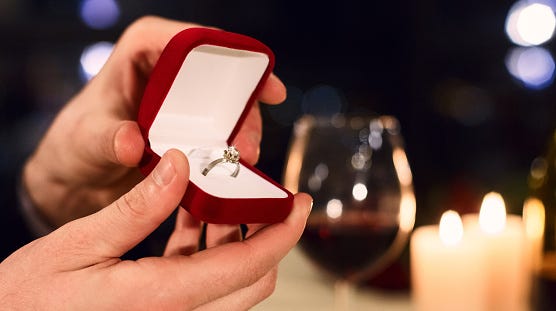 The chances of finding everlasting love on “The Bachelor” franchise are rare.

Here’s where all of the engagement rings from failed ‘Bachelor’ relationships end uphttps://t.co/gTn6CsFXbe

Now one of their very own has revealed where all the discarded diamond engagement rings from the high-profile breakups end up, reported “Today.”

“I will say there is a ring graveyard,” the 29-year-old said during an appearance on the “Bachelor Party” podcast. “They get to keep [them] all locked away, hidden from [everyone], all the scorned rings.”

The contestants typically get custom-designed rings from celebrity jeweler Neil Lane and can cost upwards of $100,000 each.

Kufrin originally appeared on season 22 of “The Bachelor” and accepted the final rose from Arie Luyendyk Jr. The pair got engaged, but months later Luyendyk infamously dumped her on-camera and Kufrin returned the so-called “scorned ring.”

“I didn’t want a pity diamond,” she added.

“Bachelor” host Chris Harrison previously revealed the stipulations involved with the rings should a couple breakup.

“There’s some rule, after a certain number of years, you get to keep it anyway,” Harrison said in 2016. “But [ should they split] after months … it goes back.”

After failing to find true love on “The Bachelor,” Kufrin went on to become the “Bachelorette” and came out victorious by getting engaged to Garrett Yrigoyen.

While the pair have yet to get married, they recently relocated to Carlsbad, California together and have plans to tie the knot - and avoid the ring graveyard - in the near future.

“I think once we buy a place and are actually settled somewhere and not just renting, we’ll probably get to that next step,” Kufrin told Us Weekly.