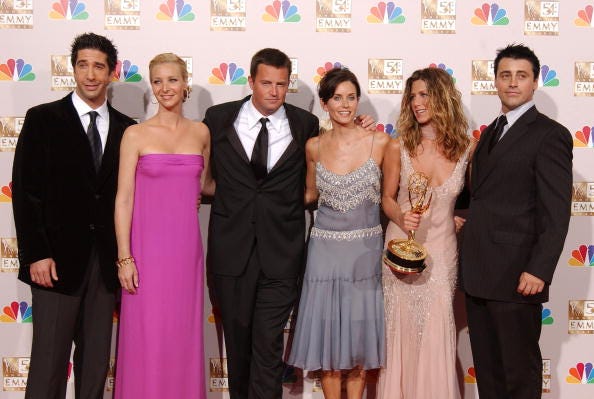 You can now own a piece of the actual “Friends” set.

In honor of the show’s ongoing celebration for its 25th anniversary, Warner Bros. is auctioning  props, costumes, production materials and official reproductions from the iconic sitcom, reported E! News.

Friends Props Are Going Up for Auction: This Is Your Chance to Own a Piece of TV History https://t.co/iGWJJfu4Qk

All proceeds from the sale will benefit the Trevor Project, the world's largest suicide prevention and crisis intervention organization for LGBTQ youth.

Some of the items include a reproduction of the show’s legendary orange couch, Monica and Chandler’s wedding invitations, Joey and Chandler’s wood canoe, and outfits worn by actresses Jennifer Aniston, Courteney Cox, and Lisa Kudrow.

Over 80 lots will be available for online bidding and every piece comes with an original Warner Bros. Certificate of Authenticity.

The studio is partnering with online auction company Prop Store for the sale that begins on December 3rd, which is also Giving Tuesday.

"Prop Store is thrilled to be working with Warner Bros. to auction some incredible material from all 10 seasons of 'Friends,'" said a press release. "The series gave us so many laughs during its original run and continues to entertain and inspire fans around the world."

But be forewarned, the starting prices for the auction aren’t exactly cheap. For example, the orange couch is estimated to be worth between $6,000- $8,000, while door picture frame from Monica’s apartment is estimated between $2,000 - $3,000.

In addition, Central Perk fans that register for the auction at Propstore.com/Friends will be entered into a sweepstakes to win the script from the season one episode “The One With The Dozen Lasagnas.” The winner will be notified on December 17th, which is the last day of the auction.

The online sale isn’t the only way to celebrate the NBC series. Several Thanksgiving episodes will be shown in movie theaters just in time for the holiday, while Warners Bros. is also offering a special “Friends”-giving studio tour.