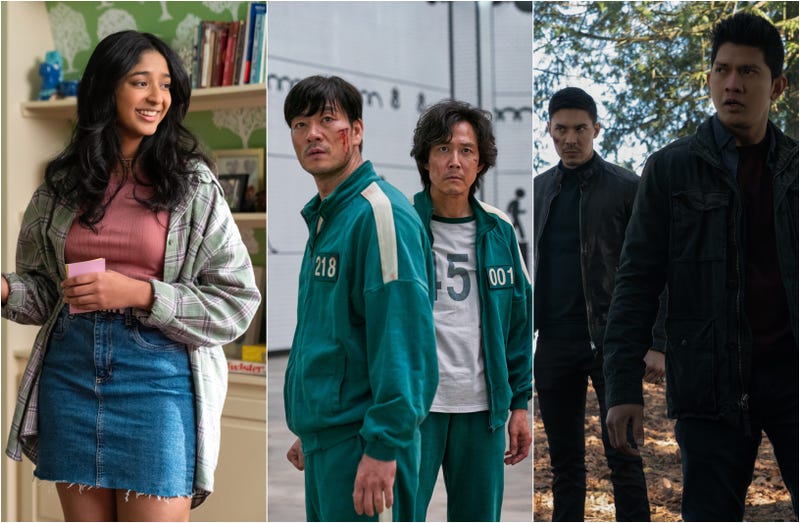 May is Asian American and Pacific Islander Heritage Month.

From comedies to thrillers and even some coming of age rom-coms, here are the best TV shows to watch for AAPI Heritage Month!

Fresh off the Boat

Randall Park and Constance Wu spearhead the six-season sitcom based on chef Eddie Huang’s best-selling memoir of the same name. It’s a humorous look at the lives of immigrants in America as Eddie’s family moves to suburban Orlando in pursuit of the American dream.

The South Korean survival drama took the world by storm. Eyes were glued to the TV as hundreds of contestants in need of money accepted an invitation to compete in children’s games despite the deadly stakes.

Olivia Liang stars as Nicky Chen, a Chinese-American woman going through a quarter-life crisis who drops out of college and seeks guidance at a monastery in China. When she returns home, she realizes her community is in trouble, so she finds her purpose by protecting them from crime and corruption while setting her sights on an assassin who killed her mentor.

Never Have I Ever

Created by Mindy Kaling, the comedy-drama focuses on a first-generation Indian-American named Devi (Maitreyi Ramakrishnan) who seeks popularity at school.

The crime series by Miranda Kwok tackles immigration issues as Cambodian doctor Thony De La Rosa comes to the U.S. to get life-saving treatment for her son. When the system fails her, she stumbles into a life of organized crime in order to ensure her child’s survival.

The Canadian sitcom focuses on the Korean-Canadian Kim family and depicts the ins-and-outs of running a “Mom and Pop” convenience store in a culture that’s not your own in hopes of giving your kids a better life. The series is based on Ins Choi's 2011 play of the same name.

The year is 2032 and Dwayne Johnson is running for president, which forces him to be a little introspective as he takes a comedic look back on his childhood, his teenage years, and all the moments that shaped him into a man qualified to lead the American people.

In this crime drama, martial arts prodigy and Chinese immigrant, Ah Sahm (Andrew Koji), arrives in San Francisco and becomes a hit man for a powerful organized crime family in Chinatown amidst the gang wars.

Sandra Oh stars as Eve, a MI5 security officer who pursues Villanelle, a skilled assassin. As they indulge in a cat-and-mouse game, they find themselves equally as obsessed with one another.

Comics Maya Erskine and Anna Konkle, as adults, play versions of themselves in the year 2000 as they navigate the ups-and-downs of middle school.

Kal Penn stars as Garret Modi, the youngest Queens councilman ever elected, whose reputation takes a hit. He’s forced to move in with his sister and figure out how to get back on his feet. He’s eventually hired on by a group of idealists who need his assistance to become citizens.

Maggie Q is Nikita, a woman rescued from death row by a secret government agency called the Division, who fake her execution and train her as a spy and assassin. After several years in hiding, she makes it her mission to blow open their covert operation and stop them from turning more young people into killers.

The supernatural action series focuses on Kai Jin (Iko Uwais), a young Chinatown chef in present-day San Francisco, who has a mystical encounter and reluctantly becomes the latest in line of Wu Assassins in order to stop criminals from destroying the world.

Awkwafina Is Nora From Queens

As the title of the comedy implies, Awkwafina stars as Nora in a scripted series about her real-life beginnings in Flushing, New York, as she leans on her family, including cousin, dad, and grandma, to navigate young adulthood.

If you got through the list and still need something to watch, keep your eyes peeled for this Korean remake of the Spanish hit crime drama “Money Heist.” It’s set in the fictional Joint Economic Area, “in a world where the Korean Peninsula faces reunification.” It has an impressive cast featuring “Parasite” star Park Myung-hoon, “Lost” actor Yunjin Kim, and “Squid Game’s” Park Hae-soo.

Watch it on Netflix starting June 24