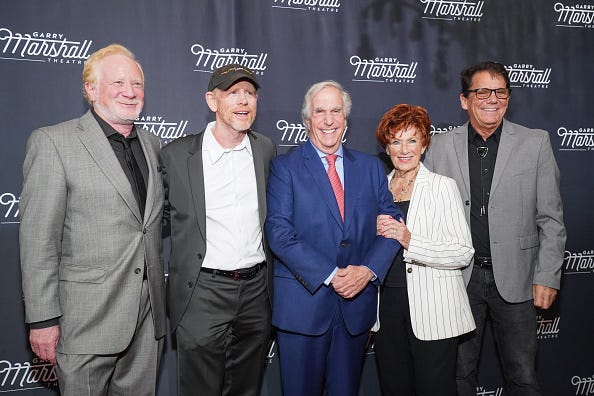 The cast of the hit sitcom from the ‘70s and ‘80s reunited to pay tribute to the show’s late creator Garry Marshall, reported Entertainment Weekly.

“Backstage before an event honoring #GarryMarshal to support his theater in #Toluca Lake,” the Oscar winner captioned the pic.

Tom Bosley, who played Howard Cunningham, passed away in 2010, while Erin Moran, who portrayed Joanie Cunningham, died in 2017.

The former castmates reminisced about their time on the iconic series, which depicted an idolized version of life in the 1950s and 1960s.

“You never saw two guys who filled the top spot so beautifully [than Howard and Winkler],” Ross, 91, said. “I’m proud to be their mother.”

While Howard, who credits Marshall with helping him transition from an actor to a director, was extra reflective about their combined history.

“You can’t take these things for granted,” the 65-year-old added. “We’re here in Garry’s name and yet I’m experiencing a connecting of the dots of an entire story.”

A documentary about his life is currently in the works.