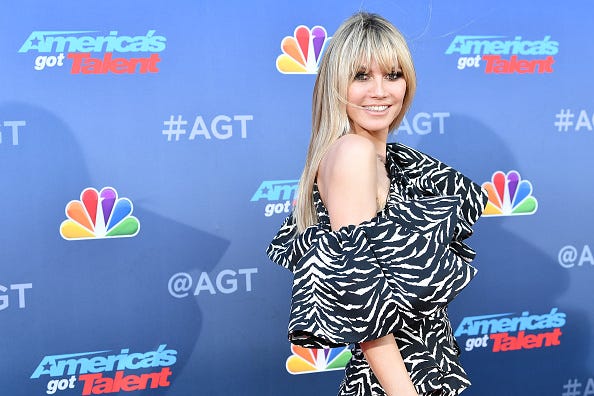 The show must go on without Heidi Klum.

Klum was noticeably absent from Tuesday’s taping of “America’s Got Talent.”

While the 46-year-old arrived to the set in good spirits earlier in the day, she was later forced to leave upon feeling ill, according to TMZ.

When it was time to tape, the show’s three other judges, Howie Mandel, Sofia Vergara and Simon Cowell, showed up to the stage and notified the audience that Klum would not be joining them due to food poisoning.

But TMZ claims that is untrue and that she was simply feeling under the weather. They also made sure to note that her condition has nothing to do with coronavirus.

Interestingly, “AGT” has not enforced the audience-ban that has been implemented on other shows such as “Wheel of Fortune,” “Jeopardy,” “Live with Kelly and Ryan,” and “The View.”

All those programs have temporarily halted having live studio audience members for the time being amid the ongoing COVID-19 outbreak.

A post shared by America's Got Talent - AGT (@agt)

Klum’s absence for the taping comes as she recently returned to the franchise after stepping away last season.

She and newbie judge Vergara replaced Gabrielle Union and Julianne Hough, who were not asked back after jumping on board for one season.

Klum previously served as a judge through the show’s 8th - 13th seasons.

In addition to her duties on "AGT," the mother of four is readying for the premiere of her latest fashion series, “Making the Cut.”

She and fellow “Project Runway” alum Tim Gunn are co-hosting the Amazon Prime series, which set outs to find the next big fashion designer.

“Making the Cut” will start streaming on March 27th.