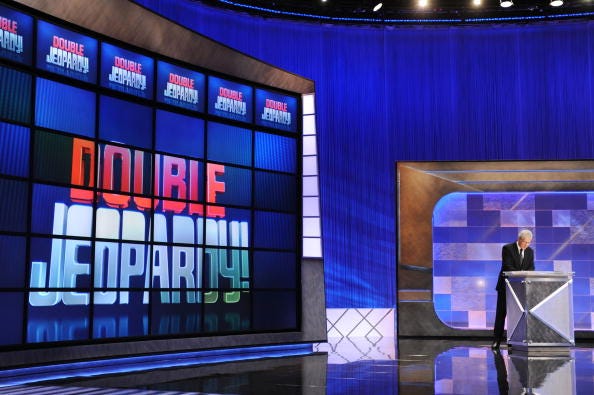 It seems the new “Jeopardy!” frontrunner’s winning streak has come to an end. Jason Zuffranieri suffered a dramatic loss on Thursday night’s game after 19 consecutive wins.

While Zuffranieri can still take home the #3 title, his earnings are officially capped at $532,496. He’s still the third-highest regular season winner in the history of the show, but he wasn’t able to touch the titles of Ken Jennings or James Holzhauer, who own the number 1 and 2 spots respectively.

The clue he lost on? “’The Eighth Wonder,’ by composer Alan John & librettist Dennis Watkins, is about this building that opened in 1973.” Zuffranieri was unable to answer the clue correctly, and was beaten out by Gabe Brison-Trezise.

According to the New York Post, Brison-Trezise is a 24-year-old researcher from Washington, DC.

Zuffranieri’s winning streak caught the attention of viewers after he won 19 straight games. Even Alex Trebek was stunned by the new frontrunner.

“Our new season has gotten off to a great start, I feel, thanks to our new contestant Jason,” Trebek says in a promotional video.

After hitting the $437,000 mark, Trebek announces, “In comparison, only two players, Ken Jennings and James Holzhauer, have won more money in a regular competition games on our program.”

He continues, “Jason is a force to be reckoned with.”

Another day, another record. Jason is now the 3rd-highest money winner!

The “Jeopardy!” Instagram account posted about the unfortunate and dramatic loss for Zuffranieri, saying that they have a feeling he’ll be back eventually

Jason's 19-game win streak has come to an end! Don't worry – something tells us he'll be back. Congratulations to our new champion, Gabe Brison-Trezise!

Zuffranieri reveals in the video how he feels to have come so far in his “Jeopardy!” career. He says himself, “If I can do it, you can do it.”