Sometimes the best recipes come from your favorite TV shows!

“Friends” fans may recall the infamous “trifle,” a Thanksgiving dessert concocted by Rachel (Jennifer Aniston) in the season 6 Thanksgiving episode.

In the episode, she mixes two recipes – one for an English Trifle and one for Shepherd's Pie – adding layers of beef, peas and onions to the dish consisting of ladyfingers, jam, custard, raspberries, bananas, and whipped cream.

After the initial taste test, Ross (David Schwimmer) had some valid questions about the ingredients that were used to which Rachel replied, "Yeah, that was weird to me, too. But then, you know, I thought 'there's minced meat pie,' I mean, that's an English dessert. These people just put very strange things in their food."

The recipe is featured in the “Friends: The Official Cookbook” by Amanda Yee, which also gives fans Ross’ iconic turkey sandwich recipe.

While a meaty and sweet mixture might not sound all that appetizing, it was put to the test by a writer from USA Today who revealed that it was “actually good.”

The recipe is altered a bit to appeal to a wider palate.

It calls for the chef to make jam from scratch -- and gives you the recipe for that on a separate page titled “The One With the Jam,” which calls back to the episode where Monica (Courteney Cox) makes jam following a breakup. 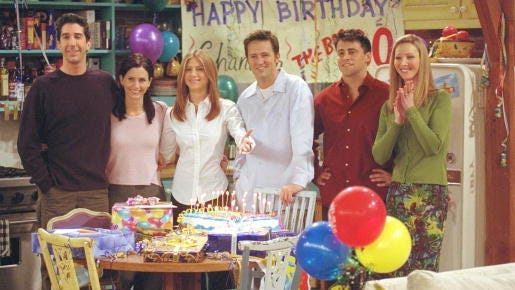 It also requires you make a homemade whipped cream and lemon curd mixture, but don’t worry, the recipe is also provided.

All of that is paired with meat, which again, might sound gross, but Yee swaps beef for bacon, which tends to go well with sweet flavors.