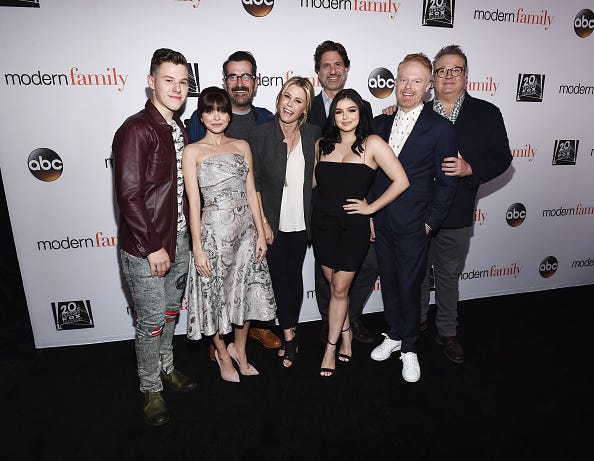 It’s the beginning of the end for “Modern Family.”

The ABC series is entering its 11th and final season, and to celebrate the bittersweet occasion, the cast assembled to recreate a photo taken on the first day of production, according to People.

Back in 2009, the stars took a group shot after the first table read for the first script of the first season of the series.

Ten years ago we took the first cast photo outside our first #modernfamily table read. Today, the ending begins. 😢

The new picture also had one addition as Aubrey Anderson-Emmons, who plays Mitchell and Cameron’s daughter Lily, didn’t join the series until the third season.

“Ten years ago we took the first cast photo outside of our first #modernfamily table read. Today the ending begins,” the show’s co-creator Steve Levitan captioned the side-by-side photo on Instagram.

While the adults look more or less the same, it’s the children (now adults too) who really make you realize how much time has passed.  This was further illustrated as it also happened to be Rico Rodriguez’s 21st birthday. Cheers, Manny!

“Modern Family” premiered in 2009 and was an instant ratings hit. The show has won 22 Primetime Emmy Awards including five for Best Comedy Series.

The final season is set to premiere on Wednesday, September 25th at 9pm.