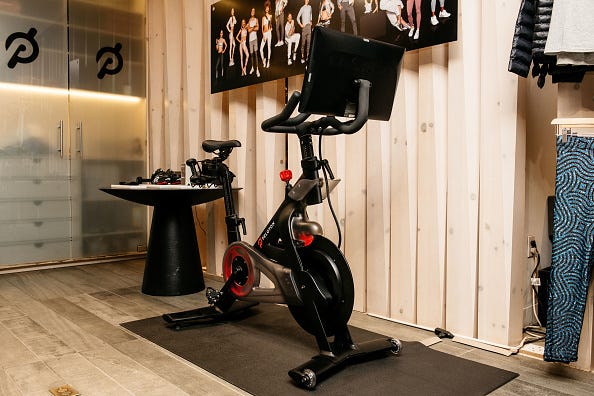 The actress in the widely panned Peloton ad is taking part of the blame for the commercial’s viral backlash.

Monica Ruiz, aka the ‘Peloton wife,’ has broken her silence in her first television interview since the scandal broke and addressed her culpability for the clip which many called out for being “sexist.”

“It was my face that was my problem,” Monica Ruiz, actress in viral Peloton ad, jokes about why the commercial went viral and explains why she wanted to share her story pic.twitter.com/KdqrcYO7bS

"Honestly, I think it was just my face,'' Ruiz jokingly told Hoda Kotb on “TODAY.”

"My eyebrows looked worried I guess. People were like, 'You look scared.' I'm telling you, it was my face, that was the problem, and it just exploded it from there. She looks worried.”

For those that may have not seen it, the 30-second commercial, entitled “The Gift That Gives Back,” features a husband gifting his slender wife (Ruiz) a Peloton stationary bike for Christmas. After documenting her workouts over the year, the ad ends with the husband and wife watching her fitness diary together.

The negative reaction was swift and severe, with many accusing the commercial of being tone-deaf, and eventually lead to a 15% plunge in Peloton stock.

Ruiz was shocked by the speed in which the ad became a cultural phenomenon and was initially hesitant to do any interviews for fear of people thinking she was trying to profit off of the backlash.

"I just wanted to let everyone know I'm fine," the mother of two added. "I'm OK, I'm not in a rehab for mental health anywhere."

Monica Ruiz was asked to be in a commercial for @VancityReynolds’ gin company after the Peloton commercial she starred in went viral, and she had never met Ryan … until today! pic.twitter.com/pkq6Go3alM

But it turns out she didn’t have to do any press as her next role quickly found her. Within days of the Peloton ad becoming a sensation, Ryan Reynolds’ Aviation Gin company enlisted Ruiz for their latest ad.

The beverage clip was created as an unofficial sequel to the Peloton ad and features an emotionless Ruiz donning drinks with two pals, in what appears to be a post-breakup girls' night out.

Ruiz got to finally meet Reynolds as the actor showed up in the midst of the interview. "I feel like I'm in an alternate universe right now," she disclosed as the action hero sat at her side.

While Ruiz has managed to find a silver lining to the controversy, she’s now ready to get back to her creative pursuits.

"I hope people can see me as an actress," she said. "I like to do movies and TV, and I’m not actuality the Peloton lady, (so) let me work other jobs."

Perhaps Reynolds could help out in that department as well.