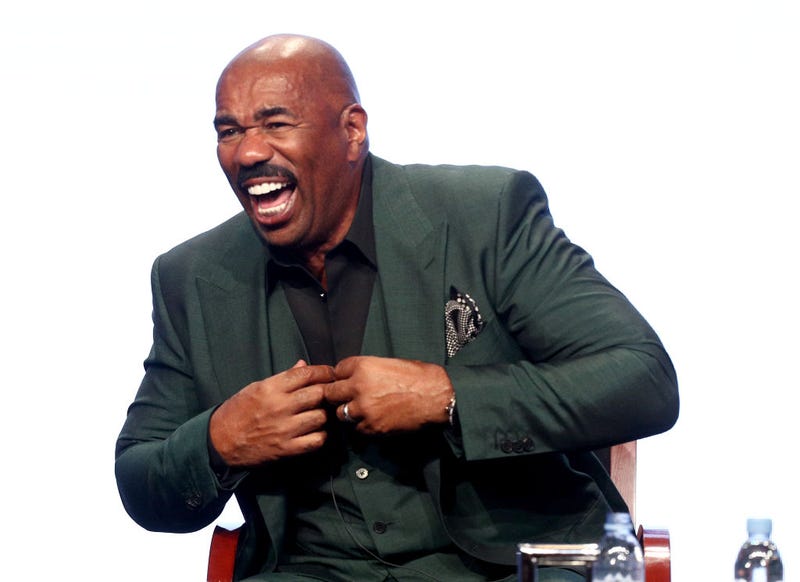 Name something you never want to do while Steve Harvey is filming an episode of “Family Feud.”

The correct answer -- based on this now-viral video -- is to walk on the set and interrupt him.

Behind-the-scenes footage is turning out to be more entertaining than the live show thanks to Harvey’s comedic timing.

In the clip, Harvey is hosting the game show when he is accidentally interrupted by his stylist, Elly Karamoh, who ventures on set.

Elly wasn’t aware that they were in the middle of filming and walked on stage to give Harvey a bottle of water.

"Elly, what are you doing?" someone off-stage asks when they notice him behind Harvey.

After realizing his mistake, Elly quickly runs off, but the damage has already been done.

Harvey is shocked by Elly’s misstep as is evidenced by his facial expressions.

He stares at his stylist for an extended amount of time before jokingly asking: "What the f*** is wrong with you?!"

While Elly probably regretted his decision, the production team was thrilled as several people could be heard saying that they would be putting this clip up on Youtube, which is where it currently lives.

Elly clarified that he wanted to bring Harvey some water, he quipped back: “Who told you to bring s*** out her on TV?”

Harvey then remained in a state of confusion as bellows of laughter erupted from the audience, contestants, and the crew.

Elly then admitted that he didn’t know they were taping, which really riled up Harvey.

“"What the f*** do you think these lights are for?" he shouted, adding that there are eight cameras in the room that are being operated.

“Family Feud” is known for its wacky moments, so while Harvey was definitely surprised by Elly’s appearance, he played it up purely to entertain the audience.

“The was better than the stiletto joke I was going to make,” he told everyone before getting back into the swing of things.

Fans online even got a good laugh with one commenting: "Steve's stylist deserves a raise after this!.”

By stepping onto that set, Elly had no idea he was going to be responsible for what one fan called the “most hilarious thing I've ever seen in my whole life!”

Thanks for the laughs, Elly!