When “Who Wants to Be a Millionaire” returns on Sunday, it’ll pay tribute to original host Regis Philbin, who passed away in July at the age of 88.

Michael Davies, who produced the original series and will be lending a hand to the revival starring Jimmy Kimmel, said it was very important that they paid “Regis a proper tribute.”

“I’m so glad that ‘Millionaire’ showed America and the world the outstanding broadcaster that Regis was. It made him a bigger star and more of a household name and brought him so much joy,” he said per The New York Post, adding, “seeing that show succeed [for Regis] meant a lot to me.

The tribute will air towards the end of Sunday’s season premiere, which finds celebrity contestant Tiffany Haddish in the host seat.

“We sort of say goodbye to the contestants rolling over to the next show and then Jimmy speaks,” Davies explained, adding that it’ll include a video montage of greatest moments.

He added: “He wrote a beautiful tribute to Regis and then we go to an edited package of some of my most memorable moments of working with Regis on the show. That was very difficult to condense but I found some great moments that fans of the show will remember.”

He said that will be followed by one of “Regis’ favorite songs, performed by him” and they will “just leave the studio empty, with the lights up and a photo of Regis on the back wall”

“We give him an emotional sendoff on the stage and the studio he owned,” he said. “We’re all here because of Regis Philbin and we all know that.”

Regis was largely responsible for the game show’s success after its 1999 primetime premiere. In a video posted by ABC on October 15, Kimmel tells Philbin that this is "his show."

Davies wasn’t the only one who shared a strong bond with Philbin as Kimmel connected with him after being booked on a celebrity edition of the show when he wasn’t “really a celebrity.”

“Regis was tickled by him; I remember the night Jimmy first got on Letterman’ … Regis calling me and laughing out loud on the phone watching Jimmy,” Davies said. 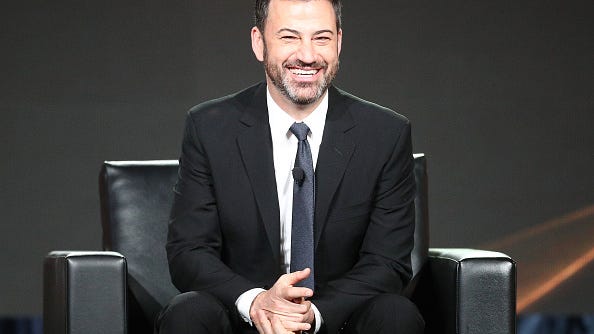 “He was proud and felt he was somewhat responsible for bringing Jimmy on television,” he recalled, adding, “There was a great affection between the two men; you could see it on every guest appearance Regis made on ‘Jimmy Kimmel Live.’”

He goes as far as to compare the two hosts stating that they “never forgot their roots and their original, oldest friends and family.”

“It was very important to me to find [a host] who Regis would bless and believe worthy of taking his seat,” he concluded.