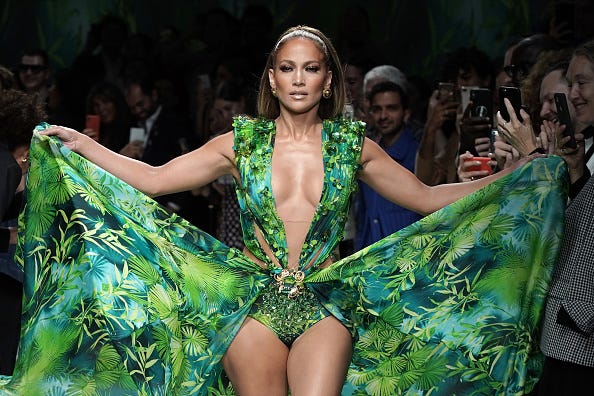 Her love don’t cost a thing, but Jennifer Lopez’s infamous green Versace dress will set you back a pretty penny.

Last month, the 50-year-old walked the runway at Milan Fashion Week in a reimagined version of the iconic gown she wore at the 2000 GRAMMYs, and now, it’s for sale to the general public, according to the Page Six.

For $9,325 fans can channel their inner J.Lo and really turn heads, because the 2019 recreation is actually skimpier than the original show-stopping number.

While the update features a similar jungle print and plunging neckline, it leaves less to the imagination because it's sleeveless and has cut-outs at the waist.

The “Hustlers” star previously revealed how her stylist tried to talk her out of wearing the original gown to the GRAMMYs because it had already been worn in public by both Donatella Versace and former Spice Girl Geri Halliwell.

Although the dress became a sensation and went on to inspire the creation of Google Image Search, Lopez didn’t think it was scandalous in the least.

"I didn't think it was all that risqué, to be honest,” she said. “The dress was just provocative enough to make people interested."

Fashionistas with deep pockets interested in purchasing the recreation will have to act fast, as the dress is only being offered on pre-sale until October 10th and won’t ship until May 5, 2020.

If that’s too rich for your blood, Fashion Nova is offering a budget-friendly Halloween version for $70. Trick or treat!