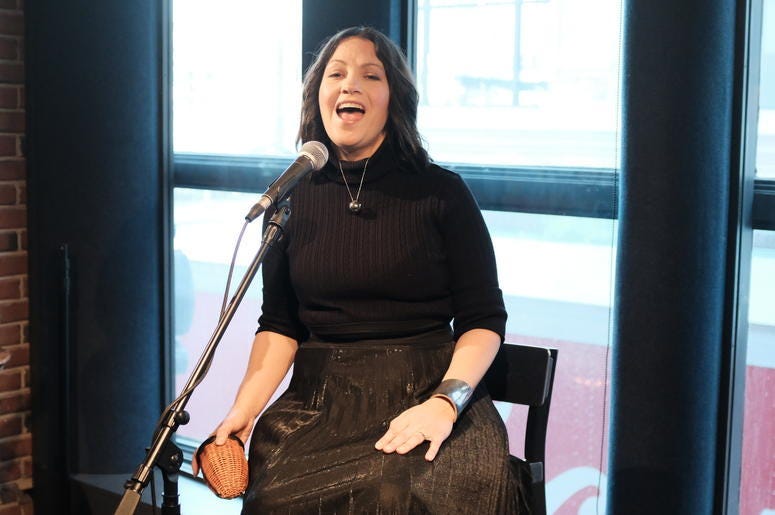 Chrissy Morgan spends a lot of time lending her voice to the projects of others, but these days, she's ready to step into the forefront.

During a recent episode of Behind the Mic with Pam Rossi, Morgan, who came to Detroit from New Jersey with her family as a young adult, says that the city has provided her with her own form of a "college education" by allowing her to learn the ropes as an active back-up vocalist in the local music scene.

The singer, who performs with the likes of Joe Jaber, R.J. Dempster, The Sights and others, said that at first, she found herself enjoying being in the background, as she didn't want to have to be the one to deal with the business side of the industry.

However, she eventually realized that she was itching to make the decisions - both creative and business ones - and decided to start pursuing a solo career.

"I found myself kind of wanting to take over," she told host Pam Rossi. "And I'm like, 'You know what - just do your own project. Let these people live their lives and just do it yourself.'"

That project is coming in the form of an EP of entitled Simple Love Songs. Morgan has been slowly working on the album for several years, and it will feature seven orginal tunes, many in collaboration with pianist Susie Woodman, who accompanied her on Behind the Mic.

"I wanted [the songs> to be something that nobody's heard from me," Morgan explained of her decision to record an album of love songs. "To bring out kind of these sweeter songs after doing the rock band thing for so long. And then the other thing about legacy is, 'What are the songs that my nieces and nephews could appreciate in the long term?' Let's start with simple love songs, and then we'll go from there."

Morgan doesn't have a solid release date for the album quite yet, but is definitely planning to drop it sometime this year.

In the meantime, you can catch Chrissy Morgan and Her Fabulous Band performing around the Detroit area, with gigs coming up all throughout the month of January.

Check out those dates and more on her website, and watch Chrissy Morgan's entire interview and performance on Behind the Mic below!

Behind the Mic with Pam Rossi wsg Chrissy Morgan

Behind the Mic with Pam Rossi wsg Chrissy Morgan