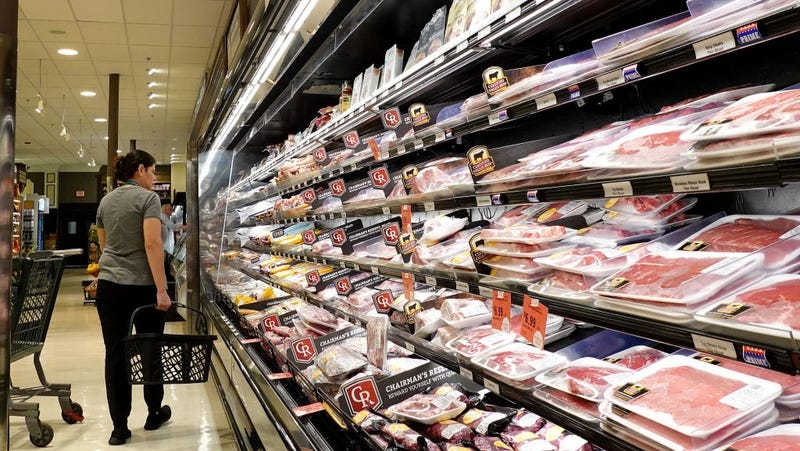 The U.S. Bureau of Labor Statistics released the latest Consumer Price Index Summary on Wednesday, as inflation rose 1.3% in June and hit 9.1% over the last 12 months, marking the largest increase since November 1981.

Americans have been struggling with the rising prices of nearly everything, and the CPI showed that gas, shelter, and food had the biggest increases last month. Grocery shopping has now become a major expense, as the food at home index has jumped 12.2% over the last year, the largest increase since April 1979.

But which specific food products have gone up the most in price?

According to the latest CPI, five of the six major grocery store food groups indexes increased in June.

Fans of cereal and bakery products have likely noticed the prices going up recently, as the Labor Department reported that they increased by 2.1% in June. It's tough to eat a bowl of cereal without milk, but the price of dairy and related products also went up last month, increasing by 1.7% after going up 2.9% in May. The most affected product by that increase was ice cream and related products, increasing by 4%.

On top of that, the index for flour saw a huge jump last month, rising 5.3% after going up by 1% in May. The other food at home index went up by 1.8% in June, as butter and margarine saw a huge increase by 5%.

Surprisingly, the only index to not increase in June was for meats, poultry, fish, and eggs, as it dropped by 0.4% thanks to declines in the beef and pork indexes, despite chicken prices increasing by 1.7%.

Overall in the last 12 months, all six major grocery store food groups have gone up, and five of the six groups increased by more than 10%. The index for other food at home has gone up the most, jumping 14.4%, as butter and margarine have gone up by 26.3%.

The prices of food have increased all over, even if you decide to go out for dinner. The food away from home index went up by 0.9% in June, and has gone up 7.7% in the last year, the biggest increase for that index since November 1981.