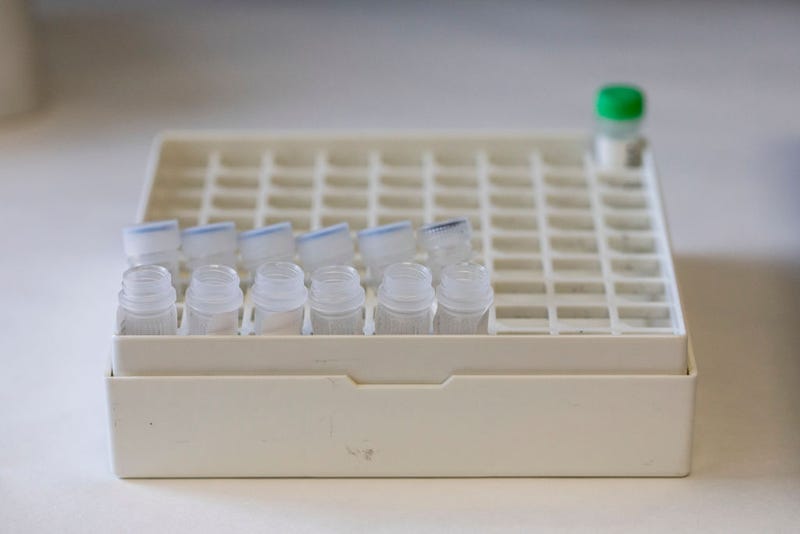 Deactivated suspected monkeypox samples lay on a table before being PCR tested at the microbiology laboratory of La Paz Hospital on June 06, 2022 in Madrid, Spain. Europe is at the centre of the monkeypox virus outbreak, the World Health Organisation reported 780 confirmed cases with Britain, Spain and Portugal reporting the largest numbers of patients. Photo credit (Photo by Pablo Blazquez Dominguez/Getty Images)
By Lauren Barry, WWJ

An emergency committee meeting was called Thursday by the Director-General of the World Health Organization to provide views on whether to declare monkeypox a public health emergency. As of 10:22 p.m. ET, the organization had not made an announcement.

“I don’t think they’ll declare it today,” Professor Julie L. Swann – department head of Industrial and Systems Engineering at NC State University who, has served as science advisor for the H1N1 pandemic response at the Centers for Disease Control and Prevention – told Audacy Thursday.

Swann said that while the spread of monkeypox around the world is a concern, most of the countries where there has been significant spread “are bringing resources to bear,” to fight the virus. She added that the ongoing COVID-19 pandemic still requires public health resources.

According to the CDC, Monkeypox is a rare viral disease that was first identified in Africa and is related to smallpox. Since its discovery, monkeypox has become endemic to some areas of Africa. In May, the WHO announced a worldwide outbreak of cases outside these endemic areas.

As of the most recent WHO monkeypox outbreak update on June 17, there were more than 2,100 cases of monkeypox worldwide, including 72 in the U.S. and 159 in Canada. The U.K. has the highest number of cases at 524.
Just one monkeypox death has been reported this year.

As of 6:43pm CEST Thursday, the WHO had reported 732,529 new COVID-19 cases in over the previous two hours. Close to 8,000 global deaths were reported Thursday alone.

Symptoms of monkeypox infection typically include fever, swollen lymph nodes and a centrifugal evolving rash. However, “to date, the clinical presentation of monkeypox cases associated with this outbreak has been variable,” and “many cases in this outbreak are not presenting with the classically described clinical picture for monkeypox,” said the WHO.

“Atypical features described include: presentation of only a few or even just a single lesion; lesions that begin in the genital or perineal/perianal area and do not spread further; lesions appearing at different (asynchronous) stages of development; and the appearance of lesions before the onset of fever, malaise and other constitutional symptoms,” according to the organization.

Many of the patients who have tested positive for the virus during the recent outbreak have been men who have sex with men, according to public health organizations. Swann explained that multiple factors could contribute to this, including public health recommendations for LGBTQ communities to get tested for sexually transmitted diseases (which could lead to a diagnosis of monkeypox) and a potential higher rate of sexual activity compared to other demographics.

She stressed that monkeypox could be transmitted in other communities, especially since the progression of cases indicates that the virus was being spread undetected for an unknown length of time.

“That’s one of the real concerning elements,” she said. “We don’t really know how long it has been spreading in a relatively silent way.”

Public health officials urge people who believe they make have been in contact with monkeypox should get tested. Swann also recommended that sexually active people should also regularly get tested for infections

“Just, in general, go get tested for STIs,” she said.

While the WHO does not classify monkeypox as an STD, its modes of transmission include close physical skin-to-skin or face-to-face contact.
Touching lesions caused by monkeypox and respiratory droplets from an infected person could lead to contamination.

“It is not clear what role sexual bodily fluids, such as semen and vaginal fluids, play in the transmission of monkeypox,” said the WHO.

Swann said that sores from another infection that causes sores, such as syphilis, could possibly provide an entry point for monkeypox infection. So, she said that people who test positive for syphilis could also ask to get tested for monkeypox.

Additionally, Swann said that mortality rates may be different in areas where cases have been popping up this year, including the U.S. Different rates of immunocompromise within communities, healthcare resources and the way cases are counted can influence morbidity rates, she explained.

“In the U.S., we have a well-developed healthcare infrastructure, and good nutrition and safe water to drink, so we do have some advantages in terms of mortality here compared to some other locations,” Swann said.

So far, smallpox vaccines have proven to be an effective prevention measure against monkeypox, according to the CDC. These vaccines were routine in the U.S. until 1972, then the disease was eradicated in this country, according to the New York State Department of Health.

Swann noted that smallpox vaccines take 28 days to be fully effective. She said that healthcare workers or people at risk for developing monkeypox could consider getting a smallpox vaccine, but didn’t recommend it for everyone as of Thursday.

No treatments specifically for monkeypox are currently available, but antiviral smallpox treatments could be effective against the virus, according to the CDC.