Sometimes, breakups can be mutually beneficial.

After reaching the playoffs in their first season under Nick Sirianni, the Philadelphia Eagles are off to a 3-0 start in 2022. Their +36 point differential is by far the best mark in the NFC, and they appear to be legitimate Super Bowl contenders as September winds down.

But hey, after a year off, things appear to be going pretty well for Doug Pederson in Jacksonville as well.

The Jaguars turned in one of the most impressive wins of Week 3, shellacking the Los Angeles Chargers -- a team that many had pegged in the preseason as a Super Bowl contender -- 38-10.

Jacksonville lost a competitive game to the Washington Commanders 28-22 in Week 1, but they've now put together back-to-back impressive victories. In Week 2, the Jaguars defeated the Indianapolis Colts 24-0 at TIAA Bank Field.

After the Urban Meyer debacle in 2021, even a below-average NFL coach would have looked like a massive improvement in Jacksonville. Pederson, though, has Jacksonville playing like a playoff contender in the early going. The Colts and Tennessee Titans each got their first wins of the season in Week 3, but the Jaguars are the only team in a seemingly up-for-grabs AFC South win two wins. A year ago, Jacksonville won just three games the entire season.

Pederson has found a way to involve both James Robinson and Travis Etienne Jr. in the offense, but the most encouraging early development of his tenure in Jacksonville is that Trevor Lawrence looks much more like the player he was expected to be when the Jaguars made him the No. 1 overall pick in the 2021 NFL Draft.

Lawrence completed 28 of 39 passes for 262 yards and three touchdowns Sunday. The former Clemson star has tossed six touchdowns to one interception in his first three games in Pederson's system. Lawrence led the NFL with 17 interceptions in his rookie season.

Jacksonville may not have been a sexy job to take this offseason, but while Pederson had to clean up some of the mess left by Meyer, he inherited Lawrence, Robinson, Etienne and Josh Allen. Travon Walker -- this year's top overall pick -- had a relatively quiet day Sunday, but has been productive early on. Don't be shocked if Pederson turns Jacksonville around quickly, we've seen him do it before. 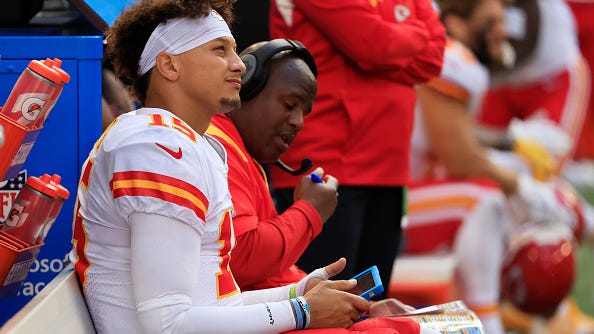