And now, we wait on Tom Brady.

During Super Bowl LIV, Brady, a three-time NFL MVP, used a Hulu commercial to announce that "he's not going anywhere." That may be true in the sense that he plans to play a 21st NFL season, but he's a little over a month away from becoming a free agent for the first time in his illustrious career. So he may be going somewhere.

Brady's decision, which will almost certainly come before the NFL Draft - which begins on April 23 - with have a ripple effect on this year's quarterback class, and the first round as a whole.

With that in mind, here's RADIO.COM's latest NFL Mock Draft, done with the understanding that we don't yet know where Brady - and a bunch of accomplished quarterbacks - will be playing next season: 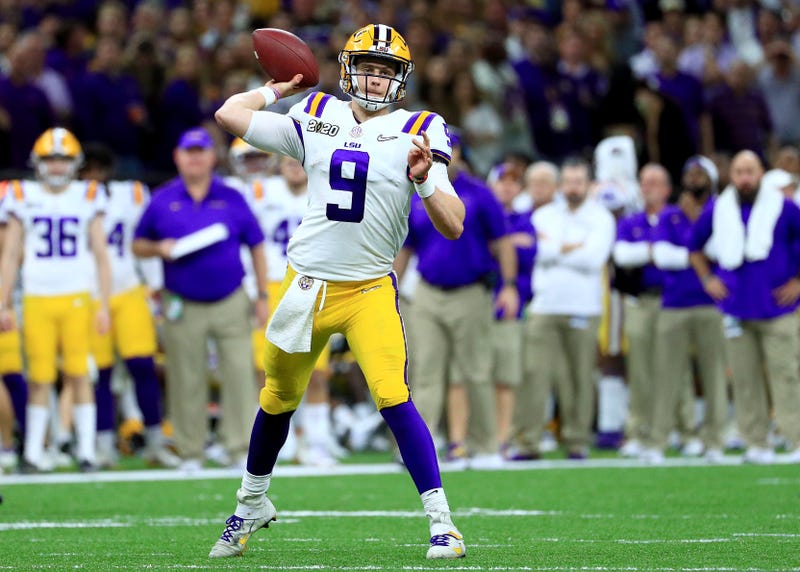 Joe Burrow is expected to be the No. 1 pick in the NFL Draft. Photo credit (Mike Ehrmann/Getty Images)

The top five selections from our previous mock have held steady. However, while the Dolphins appear to be the most likely team to select former Alabama quarterback Tua Tagovailoa, they may ultimately need to move up a pick or two to land him. It would be malpractice for the Redskins to trade out of the No. 2 pick and miss out on the chance to select former Ohio State defensive end Chase Young, who is probably the best overall player in this class. The Lions and Giants, though, may be incentivized to move down a few picks if they are able to secure the right trade package. 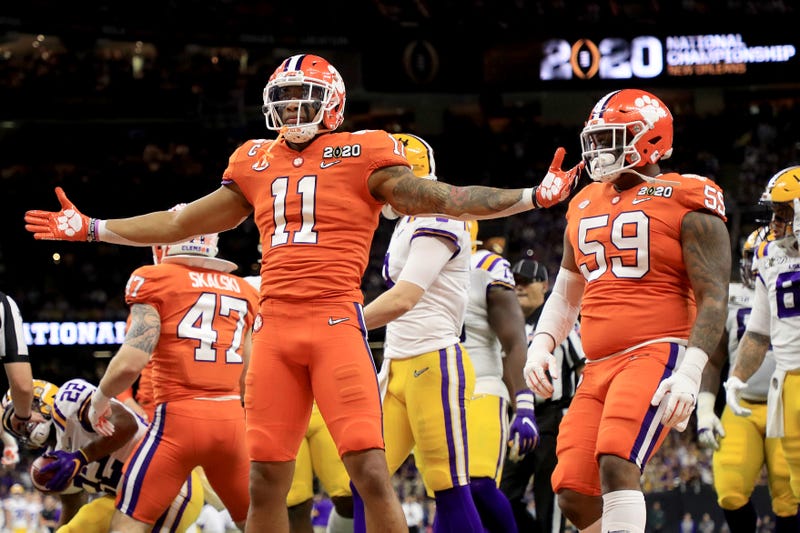 NFL Network's Ian Rapoport suggested in a recent report that Tom Brady would not only want to be compensated handsomely to return to New England, but he would have to feel confident that the Patriots are going to invest in weapons around him. So why wouldn't he hold any potential suitors in free agency to that standard? This mock operates under the assumption that Brady is most likely to play in Los Angeles in 2020. Even with Keenan Allen and Mike Williams, from here, the idea of seriously considering drafting Jerry Jeudy or CeeDee Lamb to compete in a division that features the defending Super Bowl Champion Kansas City Chiefs isn't crazy. However, left tackle Russell Okung is 31 and entering the final season of his deal. As ESPN's Todd McShay noted, there are other options for Jedrick Wills Jr. to play in the meantime, making the Chargers a more appealing team for anyone - including Brady - to play quarterback for. 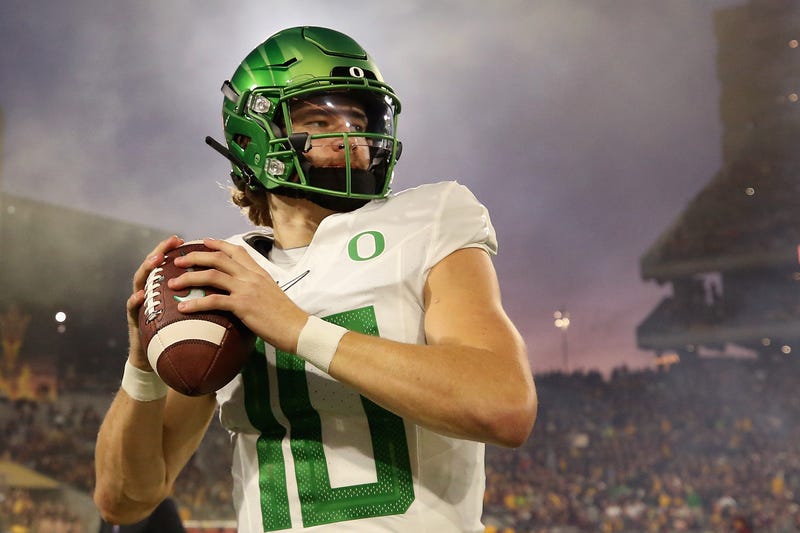 Justin Herbert is expected to be the third quarterback off the board in the 2020 NFL Draft. Photo credit (Christian Petersen/Getty Images)

Colts Get Their Long-Term Quarterback

Jacoby Brissett is under contract for 2020 with an affordable $21.4 million cap hit, meaning he's likely to be the team's starting quarterback at least to begin the season. There does appear to be a ceiling with the 27-year-old, though which would make the idea of drafting Herbert intriguing if he falls this far. As Jacob Infante of Draft Wire said, Herbert "still has some fine-tuning to do to his game." When Frank Reich and the Colts determine he's ready, he would be stepping into a roster that's ready to compete for the playoffs, whether that's in 2020 or 2021. 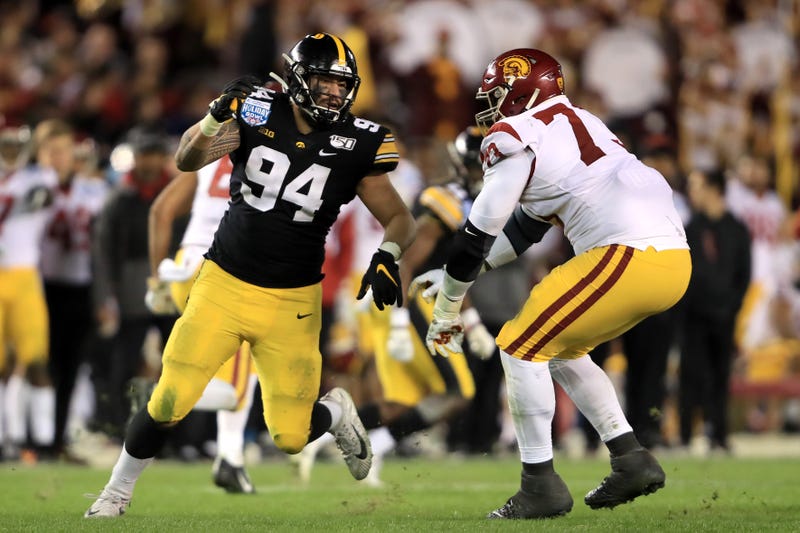 A.J. Epenesa is one of the top edge rushers in the NFL Draft. Photo credit (Sean M. Haffey/Getty Images)

The Pittsburgh Steelers had nearly double the amount of sacks than what the Falcons defense produced in 2019. 2020 will be a crucial year for head coach Dan Quinn - who has a defensive background - but the Falcons don't have the type of cap space necessary to sign an impact edge rusher. That makes finding someone like Epenesa, who had 30.5 sacks in his final two seasons at Iowa, crucial to the future of the Quinn regime. 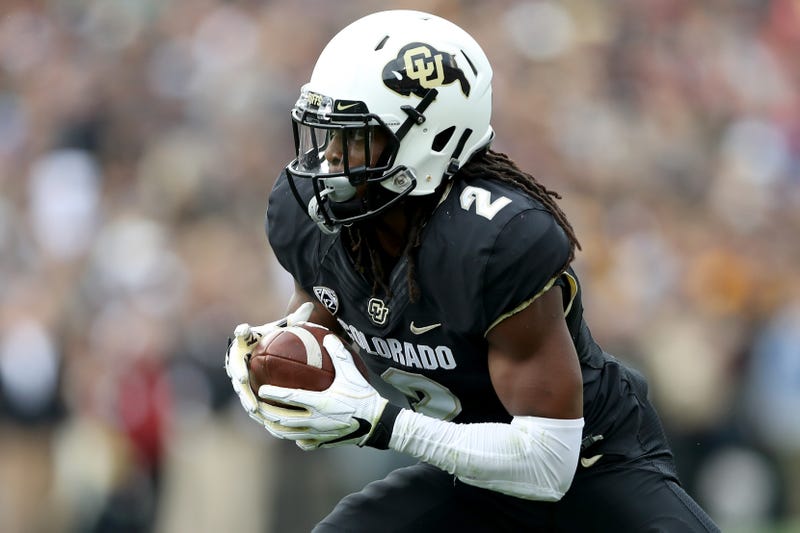 Though they may hope that 33-year-old DeSean Jackson is able to stay healthy in 2020, the Eagles offensive weapons around Carson Wentz got old, ineffective and often slow (relative to other teams) relatively quickly. Jordan Reid of The Draft Network called Shenault "a big play waiting to happen," making him an ideal fit to add into an offense that the Eagles hope will include Jackson, Miles Sanders, Zach Ertz and Dallas Goedert. Meanwhile, with the Eagles selection of Shenault, Higgins, who hauled in 25 touchdown passes over his final two seasons at Clemson, falls right to the Bills. Josh Allen could explode in year three with Higgins, Devin Singletary, Cole Beasley and John Brown at his disposal. 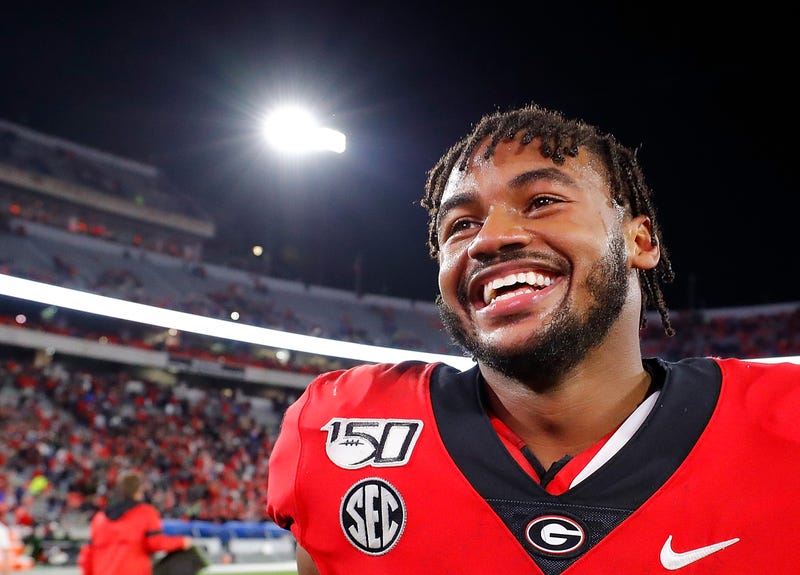 D'Andre Swift is one of the top running back prospects in the 2020 NFL Draft. Photo credit (Kevin C. Cox/Getty Images)

The Dolphins and Chiefs organizations are at polar opposite ends of their respective organizational processes, but both could stand to add a running back. At pick 26, the Dolphins use a selection they acquired in the Laremy Tunsil trade to draft a D'Andre Swift, a running back they can pair with Tua Tagovailoa. Meanwhile, the Chiefs land former Ohio State star running back J.K. Dobbins, who will pair with Super Bowl hero Damien Williams to improve an already lethal Chiefs offense.