The 49ers trounced the reigning champs in Santa Clara Monday night, continuing Jimmy Garoppolo’s career-long mastery of the Rams, a team that, for all its big-name talent (surefire Hall-of-Famer Aaron Donald, reigning Offensive Player of the Year Cooper Kupp and stud corner Jalen Ramsey, to name a handful), can’t seem to solve its in-state rival.

San Francisco’s tour de force came on the heels of a sluggish performance at Denver that had many doubting not only Garoppolo but coach Kyle Shanahan, wondering if the Niners, without starting quarterback Trey Lance (lost to a season-ending ankle injury in Week 2), were destined for mediocrity. Instead, the 49ers, led by Deebo Samuel’s six catches for 115 yards—both season-highs for the 26-year-old Pro Bowler—evened their record at 2-2, securing a much-needed win ahead of a challenging stretch with upcoming games against the Chiefs, Chargers, Dolphins and Buccaneers.

Monday’s game brought plenty of alums to Levi’s Stadium (where the Niners haven’t lost since Week 9 of last season), including three-time Super Bowl champion Jerry Rice. Much to the amusement of fans on social media, the Niners legend was spotted sipping wine from his field-level seat, instantly ascending to meme status.

When Deebo Samuel is on your fantasy league pic.twitter.com/HT5YkgKla3

Mood when the first-half Under (20.5) hits on @BetMGM: pic.twitter.com/tSrOooOWtP

Jerry Rice in the stands with that wine glass is so San Francisco lol.

A known connoisseur, Rice hosted a series of “virtual” wine tastings throughout the pandemic, showing a particular affinity for Justin Vineyards, a popular winery headquartered in Paso Robles. Between his endless wealth and proximity to Napa—wine capital of the United States—it’s easy to see why Rice, the consensus GOAT at wide receiver, would gain an appetite for the finer things in life. Sitting front row with a glass of Cabernet is an all-time flex (do they even sell that in the main concourse?), but we’d expect nothing less from Rice, whose distinguished palette is eclipsed only by his bold fashion sense, rocking his best suit to Monday’s game because why not?

Every highlight henceforth shall be punctuated by a smiling Jerry Rice wearing a purple bowtie sipping from a lowball glass in slow motion pic.twitter.com/zCG3tpX8Nw 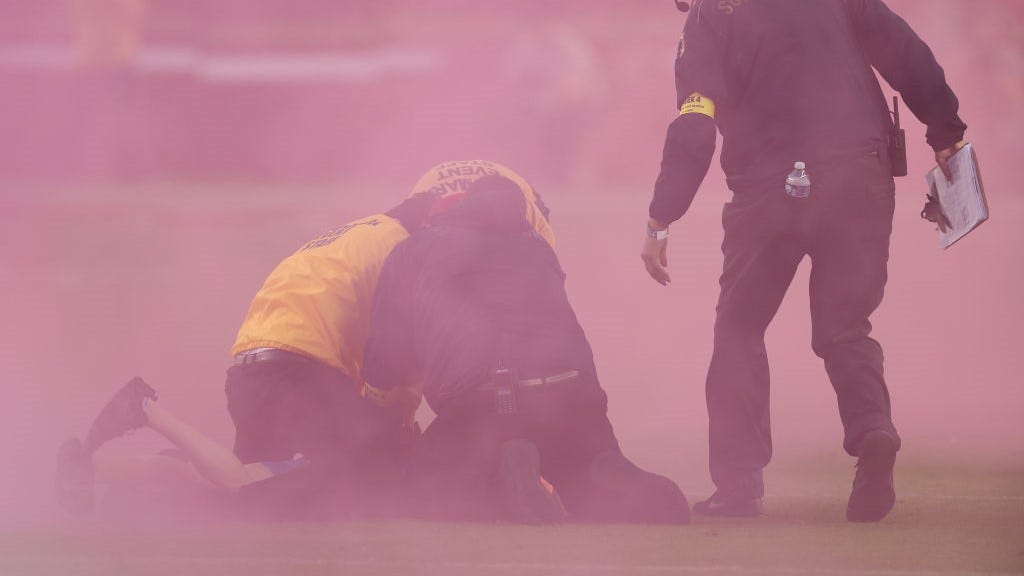