The Christian McCaffrey Sweepstakes didn’t last long. Carolina saved us all the suspense by sending McCaffrey—one of three running backs ever to record 1,000 yards rushing and receiving in the same season—to San Francisco in the first blockbuster deal of this year’s NFL trade deadline. It’s probably too fast a turnaround for McCaffrey to suit up this weekend (the Niners host Kansas City Sunday at 4:25 PM ET), though once he’s familiar with the playbook, San Francisco’s high-powered offense should be an absolute bear to defend, with McCaffrey, George Kittle, Deebo Samuel and Brandon Aiyuk rounding out one of the most dynamic skill groups in football.

McCaffrey’s ties to the Bay Area are well-documented. He and his father, former NFL receiver and three-time Super Bowl champion Ed McCaffrey, both attended Stanford, where Christian holds countless school records including most consecutive 100-yard rushing games (nine) and most all-purpose yards in a single season (3,864), the latter shattering an all-time mark Barry Sanders had held for the better part of three decades.

The connections don’t stop there. It's not hyperbole to say McCaffrey has known 49ers coach Kyle Shanahan his entire life. Ed, for much of his career, was coached by Shanahan’s father, Mike, playing for him in both San Francisco and Denver. During that stretch, Kyle, a Broncos ball boy at the time, idolized McCaffrey, modeling his game after him while even wearing 87—the same number McCaffrey wore throughout his career—at the University of Texas, where Shanahan played four seasons as a wide receiver.

49ers coach Kyle Shanahan wore 87 in college in tribute to Ed McCaffrey, who played for Kyle’s dad, and who Kyle modeled his game as a receiver after when he was a Broncos ballboy as a teenager.

That’s not even the best part. As detailed by Jordan Rodrigue and Joseph Person of The Athletic, Shanahan once babysat McCaffrey as a teenager in the late 90s.

Talk about coming full circle. While there were plenty of teams in on McCaffrey (Buffalo among them), his path to San Francisco was written in the stars, reuniting him with one of his oldest family friends. You can’t make this stuff up.

The only question that remains is what uniform number McCaffrey will don in San Francisco. McCaffrey’s preferred 22, the number he wore for all six seasons in Carolina, is already spoken for (running back Jeff Wilson has worn that number the past two seasons) as is his college number five, which belongs to quarterback Trey Lance. His dad’s number, 87, is also unavailable, with the 49ers retiring it in honor of late receiver Dwight Clark. 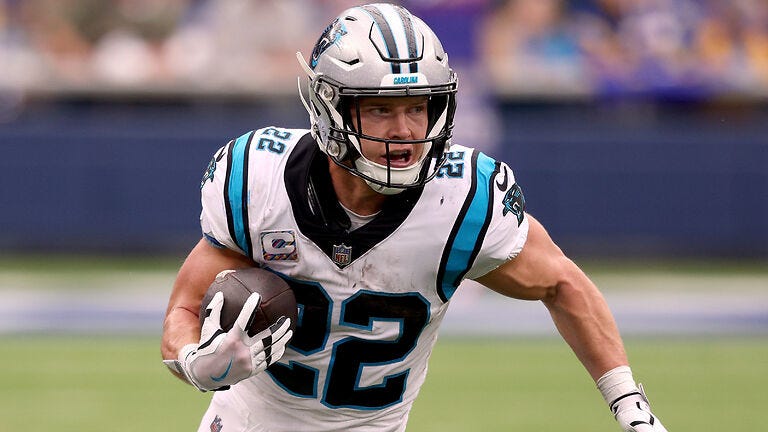