When the Philadelphia Eagles take the field against the Washington Redskins on Sunday, it will include a trailblazing moment for the franchise.

Kyle Tanguay will debut as the first male Eagles cheerleader in 30 years. He isn’t here to act as a stuntman to lift the female cheerleaders up, either, but instead will be side-by-side with the rest of them with pom-poms in hand.

Tanguay, who is openly gay, is just one of nine male NFL cheerleaders in the NFL this season — a number that was zero just two years ago.
While he came to Philadelphia to pursue a dance career at the University of the Arts, he did not expect it would result in cheerleading for an NFL team.

But one of his friends at the University of the Arts became an Eagles cheerleader last year, and when he saw there were teams in the NFL that had male cheerleaders, he was on board.

“I saw [my friend] had a great experience, and I thought it was something I really wanted to try,” he told Outsports. “A few months later I noticed the Rams and the Saints had men on the team and I thought, wow this is actually a possibility.”

Tanguay arrived to audition in March as the only man to show up in a very long time and was competing against hundreds of other candidates.
After a grueling process that included several elimination rounds, business interviews and a final audition show, Tanguay was one of nine rookies selected to the team. 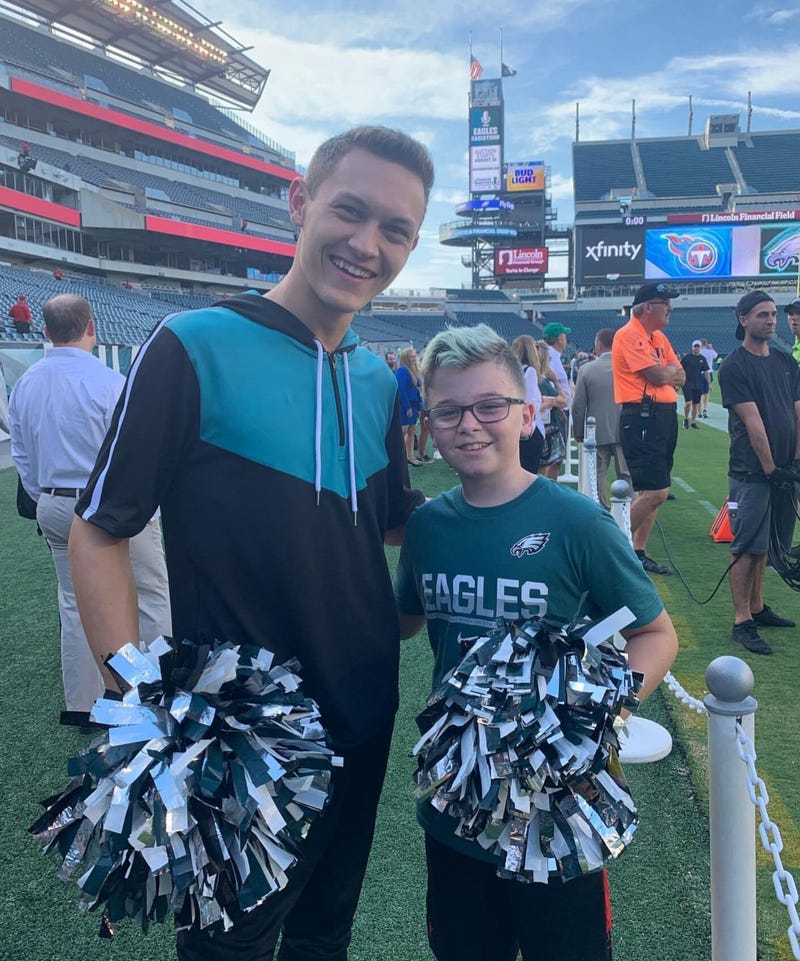 “When I was announced as a member of the squad on stage, I was so excited that I ran out and took a huge bow,” he told the Eagles team website. “I was filled with pride. Being a part of this organization is something that I have dreamed about since I moved to Philadelphia. To be able to represent the Eagles alongside the best fans in the NFL, made me really proud.”

Not only is Tanguay helping pave a path in the NFL for other male cheerleaders, but his great-grandmother was also a cheerleading pioneer.

Shirley Hodgdon was the first-ever female cheerleader at Portsmouth High School in New Hampshire in 1937. Now 98, she still has a fiery spirit and is someone Tanguay draws inspiration from.

While Sunday will mark the first regular season game Tanguay will participate in, he has already gotten a taste of what it is like to be on the field during a preseason game in August against the Tennessee Titans.

“In one word, unforgettable,” he said of the experience. “Fans interacted with me so positively and even some Eagles legends that were being honored during halftime went out of their way to say hello and welcome me to the team.”

The positive reaction Tanguay received extended beyond the field, too. His presence on the Eagles cheerleading squad has led to multiple messages via social media where parents of young boys who dance and cheer have reached out to him.

“They have expressed that I have inspired their children and that I am a role model,” he said. “Similar to my own experience, they are often the only boy on their respective squads and it definitely takes strength to continue to pursue your dreams at that age when there is a focus on your uniqueness. It is incredibly important to me to share words of encouragement with them because I want to help keep young men in the arts.”

Tanguay may have already inspired one to join him. He told Outsports that he has heard from one Philadelphia man who plans to audition next spring.